Visit from the Vice President of Southwest University

Tohoku University has reached a department level academic exchange agreement with Southwest University of China, to increase cooperation in the field of materials science.

The agreement between the Institute of Multidisciplinary Research for Advanced Materials (IMRAM) and Southwest University's Faculty of Materials and Energy was signed during the Chinese delegation's visit to Katahira Campus on March 22. The delegation included Southwest University Vice President Ding Zhongmin and the Director of Education from the Consulate-General of the People's Republic of China in Niigata, Zhang Yuansong. 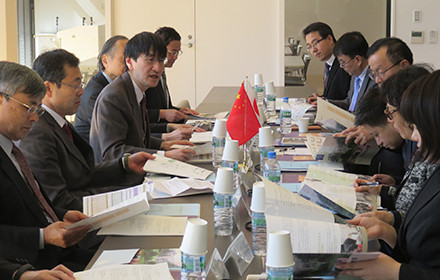 The visit was itself an exchange of sorts, following a trip to Chongqing last November by IMRAM professors at the invitation of the Chinese Consulate-General. These visits are part of a "Tohoku University/Western China Materials Science Researcher Exchange Project" supported by the Chinese government.

While on campus, the Chinese delegation met with Executive Vice President Toshiya Ueki. They discussed the possibility of collaborations beyond materials science, especially in shared areas of strength such as agriculture. VP Ding pointed out that one of Southwest University's most prominent alumni is Yuan Longping, widely known as the Father of Hybrid Rice. 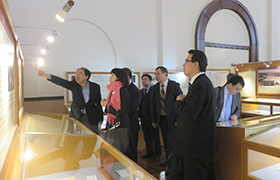 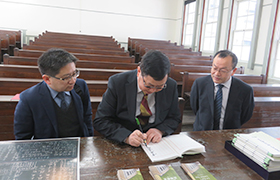 EVP Ueki too, spoke of illustrious alumni. He described the Open Door policy that attracted both female and foreign scholars to Tohoku University over a hundred years ago. Among the many early Chinese students was literary giant Lu Xun.

Before leaving the campus, the Chinese delegation visited the university archives where they learnt more about Lu Xun's life in Sendai, and signed the guest book at the lecture hall where Lu Xun once studied. 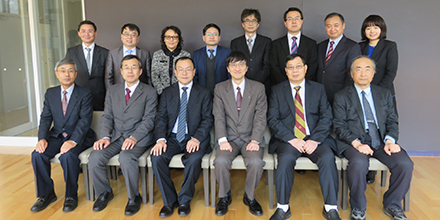