A New Guideline for the Solid-state Spin Qubit

The solid-state spin center has been a focal point of quantum information science since the 1950s. Modern research advances in this field have enabled the qubit's application to quantum computers and remote entanglement, ultimately aiming for a paradigm shift to "Quantum Supremacy."

Now, a research group has reported a new and comprehensive guideline of the solid-state spin qubit.

The research group, led by Professor David Awschalom from the University of Chicago and Argonne national laboratory in collaboration with Budapest University of Technology and Economics, Ajou University, and Tohoku University, published a new guideline in Nature Reviews Materials on April 26.

In 2011, Professor Awschalom's group experimentally demonstrated, for the first time, the room temperature operation of a silicon carbide (SiC) qubit based on their theoretical guidelines published in 2010. Thanks to SiC's unique material properties and high compatibility with conventional semiconductors, SiC became one of the main solid-state qubit materials. A guideline, which systematically integrates the cutting-edge knowledge, has been strongly sought after to trigger further breakthroughs in the field.

An important property of the spin qubit, the electron spin coherence time, is summarized for various materials in Figure 1. 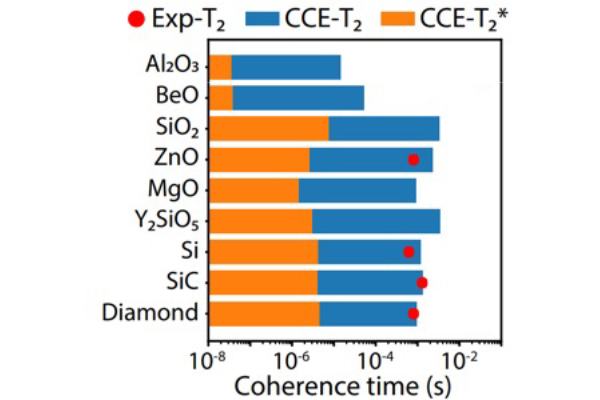 The electron spin coherence time above is just one example of the many important properties of spin qubits, as shown in the paper. "We were able to summarize many of other important components of host and spin center materials such as spin, optical, and charge properties as well as their mechanisms in relation to qubit applications," said Shun Kanai, professor at the Research Institute of Electrical Communication at Tohoku University and coauthor of the study. "These results are expected to accelerate the new fundamental and application-based qubit research, especially for quantum communication, sensing, and quantum computers."