Using magnets, a collaborative group have furthered our understanding of chirality.

Their research was published in the journal Physical Review Letters on April 28, 2021.

Chirality is the lack of symmetry in matter. Human hands, for example, express chirality. A mirror image of your right hand differs from your left, giving it two distinguishable chiral states.

Chirality is an important issue in a myriad of scientific fields, ranging from high-energy physics to biology.

Within our bodies, some molecules, such as amino acids, show only one chiral state. In other words, they are homo-chiral. It is crucial to understand how this information is transferred and memorized.

Chirality also shows up in magnetic structures. Helical magnets, where ordered magnetic moments are arranged into a spiral, work as models for general chirality problems because the magnetic moments are controllable objects; therefore, they can be extensively investigated in small laboratories.

The research group discovered that the chirality of the helimagnetic state is memorized as the domain wall helicity after the phase transition to an achiral ferromagnetic state at a high temperature in a helimagnet MnP. 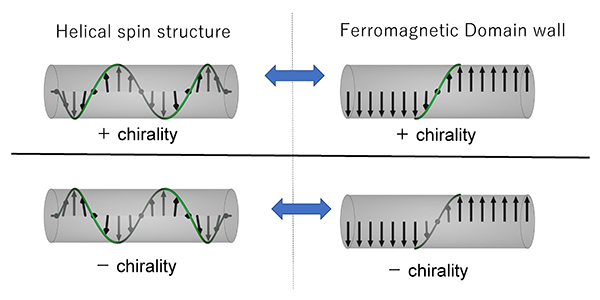 "Our results suggest the importance of chirality in defects and dislocations in general chiral issues," says coauthor of the study Nan Jian, a graduate student at the University of Tokyo and concurrently a special research student at Tohoku University.