Long-range magnetic order has been observed in quasicrystals, strange solids that show forbidden crystal symmetries, for the first time

Since the discovery of quasicrystals (QCs), solids that mimic crystals in their long-range order but lack periodicity, scientists have sought physical properties related to their peculiar structure. Now, an international group of researchers led by Tokyo University of Science, have reported a long-range magnetic order in QCs with icosahedral symmetry that turns ferromagnetism below certain temperatures.

In 1984, a routine examination of an aluminum-manganese alloy revealed a curious anomaly that was previously thought to be crystallographically impossible - a five-fold rotational symmetry. The discovery of a QC, later awarded the Nobel Prize, showed that its ordering is "quasiperiodic," leading to some exotic symmetries absent in crystals. Ever since then, QCs have been the subject of enormous scientific interest.

But their potential applications remain uncertain since no physical property signifying their long-range quasiperiodic order, such as long-range magnetic order, has been observed. Until now, that is.

In a new study published in the Journal of the American Chemical Society, a global team of scientists led by Professor Ryuji Tamura of Tokyo University of Science (TUS), Professor Taku J. Sato of Tohoku University, and Professor Maxim Avdeev of the Australian Nuclear Science and Technology Organisation and the University of Sydney, have reported the first-ever observation of long-range ferromagnetic order in icosahedral quasicrystals (i QCs or QCs with 5-fold rotational symmetry). Asuka Ishikawa and Shintaro Suzuki, members of the Tamura Laboratory at TUS, also made invaluable contributions to the project.

"This successful synthesis of ferromagnetic i QCs is the culmination of more than 10 years of research in our laboratory," says Tamura, "Nobody knows what kind of peculiar behavior they will further reveal or how they can be exploited for the advancement of technology, but now we have finally taken the first step. Elucidating the properties of these ferromagnetic QCs will contribute greatly to the development of science." 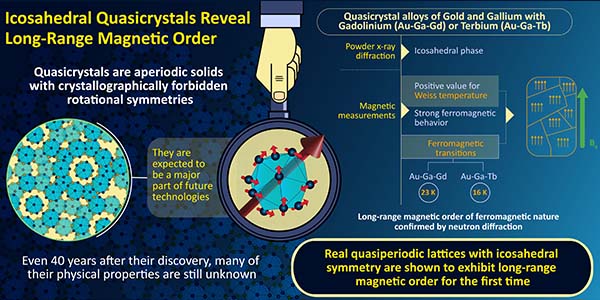 There are four major types of magnetic order: ferromagnetism, antiferromagnetism, paramagnetism, and diamagnetism. The discovery of antiferromagnetic and ferromagnetic transitions in approximant crystals (APs) -crystals with a somewhat similar structure to the related QCs that can be studied using conventional techniques - inspired the research group to look for magnetically ordered i QCs For their research, the team prepared alloys of gold (Au), gallium (Ga) and gadolinium (Gd) and gold, gallium, and terbium (Tb). Using conventional X-ray diffraction, they observed the formation of an icosahedral quasicrystal phase for both Au-Ga-Gd and Au-Ga-Tb.

They then investigated the properties of the two i QCs using magnetic susceptibility and specific heat measurements. They found that both alloys showed a ferromagnetic phase transition at 23 K (Gd i QC) and 16 K (Tb i QC), a signature of long-range magnetic order. To further validate these results, they performed neutron diffraction experiments using ECHIDNA (ANSTO, Australia) and ISSP-GPTAS (JRR-3, Japan), and looked at the neutron diffraction patterns of the i QCs at different temperatures. They observed prominent Bragg peaks below their respective transition temperatures, confirming the ferromagnetic nature of the i QCs.

Attempts to synthesize magnetic i QCs until now have all ended in "spin-glass-like freezing," characterized by a disordered magnetic state. The discovery of long-range ferromagnetic order in this study has consequences far beyond the landscape of the physical properties of materials and opens doors to tailored magnetic materials. "The crystal symmetry of ferromagnetic QCs is much higher than that of conventional periodic crystals, which makes it possible to apply them as ultrasoft magnetic materials," says Tamura.

It took decades to discover long-range magnetic order in i QCs. With further research pioneering the way, it won't be as long before the world sees what their discovery entails.