Sumitomo Rubber Industries, Ltd. (SRI) and Tohoku University teamed up to increase the speed of 4-Dimensional Computed Tomography (4D-CT) a thousand-fold, making it possible to observe rubber failure in tires in near real-time.

This breakthrough will accelerate the development of new tire materials to provide super wear resistance, greater environmental friendliness, and longer service life. It will also aid significantly in the advancement of smart tires.

SRI initially developed 4D-CT as part of the ADVANCED 4D NANO DESIGN, a new materials development technology unveiled in 2015 that enables highly accurate analysis and simulation of the rubber's internal structure from the micro to nanoscale. This analysis ultimately leads to enhanced rubber wear performance in terms of fuel efficiency, wet grip, and wear resistance.

Wataru Yashiro, associate professor at Tohoku University, had previously developed a new method to produce higher quality CT images within milliseconds. The technology, which used intense synchrotron radiation, made the breakthrough feasible. It became possible to observe rubber failure as it occurs at varying speeds, allowing a better approximation of a tire's rubber wear. 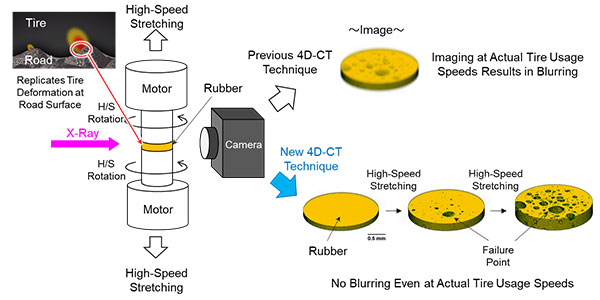 "As a result of this research, we have increased the speed of imaging by approximately a thousand-fold, meaning that a 3D image can now be captured in around 1/100 of a second," said Yashiro.

Looking ahead, SRI hopes to use this technology in conjunction with machine learning and other advanced data processing techniques to analyze the enormous amounts of data that this imaging technique will generate. On the collaborative side, SRI and Tohoku University will continue to serve as participants in the Japan Science and Technological Agency's Core Research for Evolutionary Science and Technology Program (CREST).