Researchers from Tohoku University and Tohoku University Hospital have revealed why some existing cancer treatments are ineffective in tackling the early-stages of lung cancer. A team led by Professor Tetsuya Kodama investigated the ability of anti-cancer agents to affect early-stage lung metastatic tumors.

The team developed a mouse model of lung metastasis that can produce lesions (less than 100 μm), which current clinical imaging had been unable to detect. Micro X-ray CT and histopathology were used to analyze the lungs. The small arteries were shown to be obstructed by tumor cells, which significantly reduces the total vessel length, volume, and number of vessel branches in the lung. The compromised arteries prevent anti-cancer agents with low-molecular weights from being sufficiently administered to a tumor.

Past animal experiments have shown that the enhanced permeability and retention (EPR) effect occurs when new tumor blood vessels are formed. This then enables the extravasation of certain size molecules (100-200 nm) to accumulate in tumors, more so than normal tissue. Experiments undertaken by Professor Kodama's team indicate that fluorescent dye encapsulated liposome (diameter 145 mm) are not present around lesions at the early stage of tumor development. This means that high-molecular weight anti-cancer agents also cannot be considered an effective hematogenous drug delivery method for the treatment of lung cancer at the early stage.

Surgery followed by a course of chemotherapy has been the mainstream treatment for early-stage lung cancer for some time. However, based on this research, Professor Kodama suggests that "these findings indicate the need for new drug delivery methods to replace conventional systemic chemotherapy and the development of new therapies for lung cancer." 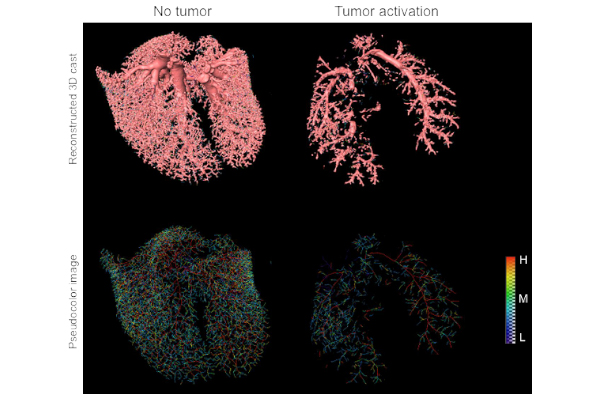