Whether through an accident or a disease, teeth loss can cause many inconveniences. Dental implants such as crowns, however, have allowed people to overcome most of these and live a better quality of life.

But just like normal teeth, these dental implants require proper care and oral hygiene to prevent further complications, such as the inflammation of the tissues surrounding the implants. While the buildup of dental plaque sticks mainly to the crown, it also adheres to the exposed parts of the screw that holds the dental fixture in place, and these are much harder to clean because they contain microgrooves that make them fit better into the upper or lower jaw bones.

Hitoshi Soyama from Tohoku University and his team from Showa University in Japan conducted a study to look for better ways for dentists to remove this plaque and prevent complications. The team wanted to study the efficiency of a cavitating jet, where high-speed fluid is injected by a nozzle through water to create very tiny bubbles of vapour. When these bubbles collapse, they produce strong shockwaves that are able to remove contaminants. 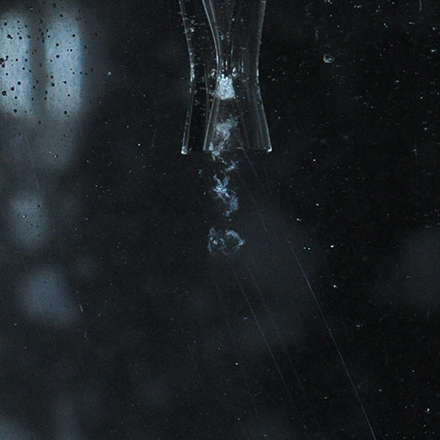 The researchers used a certain type of nozzle to create the cavitation bubbles which removed the plaque when they collapsed.

The team compared the cleaning effect of a cavitating jet to that of a water jet, which has been used for a long time to remove plaque from dental implants to keep them clean. They grew a biofilm over three days within the mouths of four volunteers, then proceeded to clean that with the two different methods, measuring the amount of plaque remaining at several time intervals.

While there was little difference between the amounts of dental plaque removed by both methods after one minute of cleaning, that changed after longer exposure. After three minutes, the cavitating jet had removed about a third more plaque than the water jet did, leaving little plaque stuck to the implant at the end of the experiment. The cavitating jet was also able to remove the plaque not only from the root section of the screws, but also from the harder-to-reach crest section, though to a lesser extent.

"Conventional methods cannot clean plaques on the surface of dental implants very well, so this new method could give dentists a new tool to better manage these fixtures which are becoming more common," says Soyama.

Previous research has shown that water flow exerts shear stress to remove the biofilm. In addition to this shear effect, the cavitating jet also produces a considerable force when the bubbles collapse that is able to remove particles from the biofilm and carry them away. The researchers suggest that the two processes probably work in synergy to make the cavitating jet superior to the water jet when cleaning the plaque off the irregular surface of dental implants.