Not All Multiple Sclerosis-like Diseases are Alike

An antibody appears to make a big difference between multiple sclerosis and other disorders affecting the protective myelin sheath around nerve fibres, report Tohoku University scientists and colleagues in the journal Brain. The finding suggests that some of these 'inflammatory demyelinating diseases' belong to a different category than multiple sclerosis, and should be treated according to their disease mechanism.

Multiple sclerosis is a well-known demyelinating disease of the central nervous system, but is not the only one by far. In inflammatory demyelinating diseases, targeted myelin sheaths - the protective layers surrounding nerve fibres in the central nervous system - become damaged, slowing or even stopping the transmission of nerve impulses. This leads to various neurological problems.

Scientists have found that some, but not all, patients with inflammatory demyelinating diseases have auto-immune antibodies against myelin oligodendrocyte glycoprotein (MOG), which is thought to be important in maintaining the myelin sheath's structural integrity. This antibody is rarely detected in patients with typical multiple sclerosis, but is found in patients diagnosed with optic neuritis, myelitis, and acute disseminated encephalomyelitis, for example. Scientists had not yet been able to show that high levels of this antibody mean it is specifically targeting and damaging MOG.

Tohoku University neurologist Tatsuro Misu and colleagues in Japan analysed the brain lesions of inflammatory demyelinating disease patients with and without detectable MOG antibodies, and found the two groups were quite different.

The white knob on the left shows demyelination of a nerve fiber end. The right image shows phagocytic macrophages infiltrating the periphery of a demyelinating lesion in a multiple sclerosis patient, suggesting a chronic solitary expanding lesion. ⒸTatsuro Misu

Autopsies were taken from brain lesions of people diagnosed with multiple sclerosis and neuromyelitis optica spectrum disorder (NMOSD), which predominantly targets the optic nerve and spinal cord. These patients did not have detectable MOG antibodies. Typical multiple sclerosis lesions showed solitary, slowly expanding demyelination with a profound loss of myelin sheath proteins, and the presence of activated debris-clearing macrophages at their periphery. NMOSD lesions showed reductions in nerve cells called astrocytes and in myelin-producing cells called oligodendrocytes, and loss in the innermost layers of myelin sheath proteins.

Biopsies taken from patients with other inflammatory demyelinating diseases with detectable MOG antibodies told a different story. Demyelination in these lesions was rapid, disseminated, and characteristically happened around small veins. Importantly, the MOG protein was initially deficient from the myelin sheaths, indicating it was attacked and damaged by the MOG antibodies. In contrast to multiple sclerosis and NMOSD lesions, oligodendrocytes were relatively preserved. Also, a specific sub-group of T cells infiltrated the lesions and macrophages carrying MOG were found around blood vessels during the acute phase of the disease. 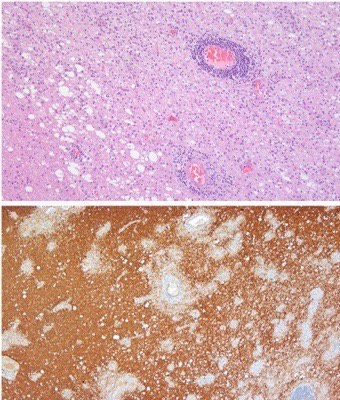