Shaking up megathrust earthquakes with slow slip and fluid drainage

Megathrust earthquakes are the most powerful types of earthquake, occurring at subduction zones - where one tectonic plate is pushed beneath another. By contrast, slow slip events (SSEs) release seismic stress at a lower rate than large earthquakes, re-occurring in cycles (across months to years). These processes can take place along the megathrust and other planes of weakness in response to loading, releasing low frequency seismic waves. Researchers at Tokyo Institute of Technology and Tohoku University consider the fluid drainage processes that can occur from SSEs and their impact on seismic activity.

While the drainage of fluids during megathrust earthquakes has been thought to occur when the megathrusts open up new pathways for fluid drainage through deformation, little has been understood on whether such fluid movements occur as a result of SSEs. Professor Junichi Nakajima at Tokyo Tech and Associate Professor Naoki Uchida at Tohoku University have suggested that fluid drainage resulting from slow slip may be an additional contributor to megathrust seismic activity.

The team investigated the relationship between SSEs and seismic activity, while analyzing a rich dataset of seismic events around the Philippine Sea Plate. As shown in their recent publication in Nature Geoscience, the scientists analyzed waveform data from beneath Kanto, Japan, dating from 2004 to 2015. 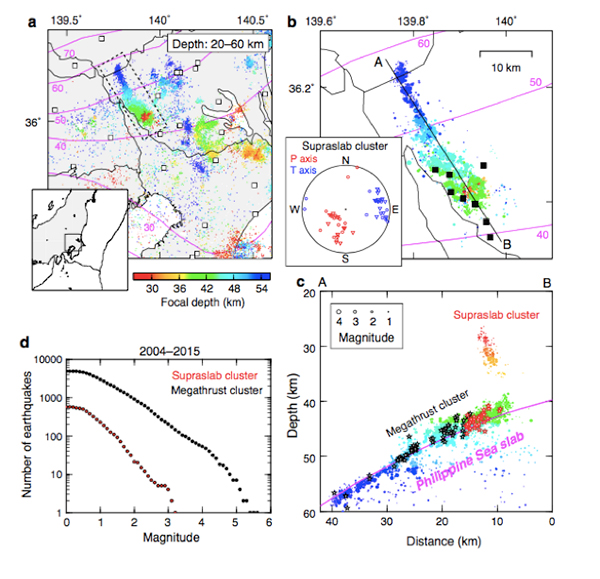 They traced the boundary of the plate, to indicate when repeating earthquakes occurred in time, while correlating seismic activity with estimated slip-rates. They infer, through their analysis, that seismic activity above the megathrust of the Philippine Sea slab varied in response to SSEs, through episodic cycles. The scientists estimated intensive draining processes during SSEs, repeating at one year intervals; accompanied with fluid transport into the overlying plate. 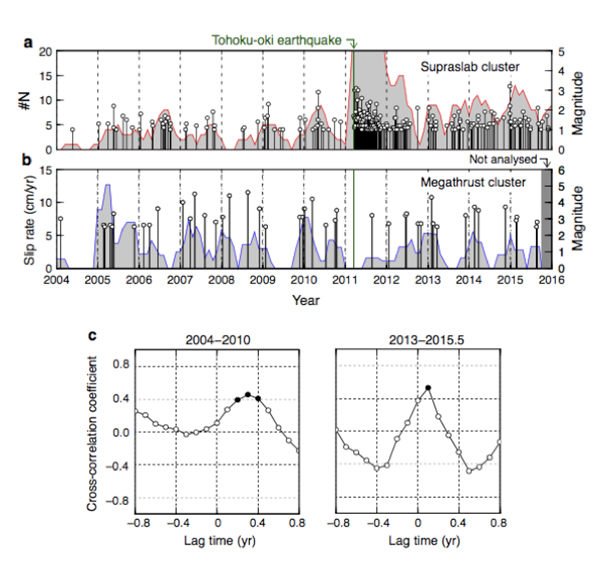 In their publication, they discuss how pore-fluid pressures play a role, emphasizing that areas of slow slip tend to have extremely high pore fluid pressures, and thus have a high potential to release fluids into other portions of the rock bodies. It is suggested SSEs could cause the movement of fluid into overlying rock units (if there were enough fracture or pore space to do so), inducing weakness in these areas and triggering seismicity.

Based on this idea, the scientists speculate that if the overlying plate were impermeable (with no suitable spaces for fluid to move into), then fluid would be forced to travel through the mega thrust itself (rather than surrounding rock pores or fractures). This could in turn, help to trigger megathrust earthquake events as a result. Therefore, slow slip could catalyze seismic activity in megathrusts. While stress modulation are important contributors to megathrust-induced seismic activity, fluid transfer by episodic SSE may play a greater role than previously thought.