The Tohoku University alumni mountaineering club has succeeded in climbing Hüiten Peak in Mongolia. At a height of 4,374 metres, the summit is the highest point in Mongolia and is under a permanent snow cap. The climbing expedition's oldest member is Mr. Hidehira at 76 years of age. Fellow members Matsuno, Koseki and Ohe bring the average age of the team to 71.5 years. 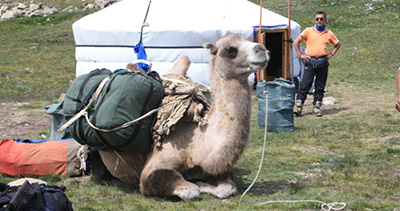 Base camp at an altitude of 2700m - Camels carried 100kgs of luggage to the advanced base camp.

Successive attempts to ascend an unclimbed mountain in China have been made in recent years, but local public safety regulations have so far prevented the climb. 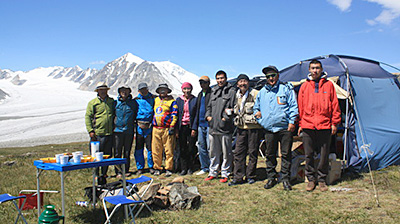 Group photo in front of kitchen tent prior to descent from the advanced base camp. Potanina glacier and the Hüiten summit in the background.

This summer the group drove up the Mongolian Plateau to reach the Altai mountain range which borders Russia, China, and Kazakhstan. Following the climb up Hüiten Peak they spent time with the local Kazakhs and enjoyed the Mongolian summer breeze. The expedition returned safely to Japan on August 3. 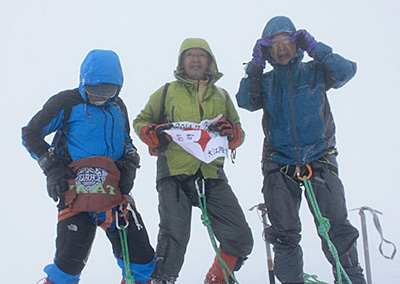 At Hüiten Peak, from left: Koseki (with the Tohoku University mountaineering club flag), Hidehira (Japanese flag), and Matsuno. Members are poised against a blizzard in -8ºC.