This week senior graduates from the Tohoku University art club held their fifteenth group exhibition since 1962. The exhibition was held at Sendai Mediatheque under the fixed title, 鳴展 pronounced mei - ten. It has a double fold meaning with the first Chinese character signifying a bird's cry, in reference to the boisterous critique given by exhibition goers, and the fact that the first exhibition was held in spring when chicks are born. The pronunciation is a pun, as it was originally held in the month of May.

In 2007, on the university's 100 year anniversary, the graduate art club got together with current students to hold a joint exhibition for the occasion. Last year the two groups reconvened, and they hope to combine talents annually to hold exhibitions.

Veteran member Tetsuo Kodaka said there is a 50 year age gap between many of the current students and veteran members. This makes for a creative exhibition, with a broad range of styles and perspectives. Kodaka took part in the second exhibition in 1963 as a first year student. He says that at that time the art clubrooms were on the Kawauchi campus, in old barracks once used by occupying forces.

These days the clubrooms are on the Kawauchi north campus, in pre-fabs beside the tennis courts. Second year education student Yukiho Ando says that students interested in joining the club are welcome to drop by anytime. She says the clubrooms are easy to find as there are generally students buzzing about the buildings engaged in various club activities. 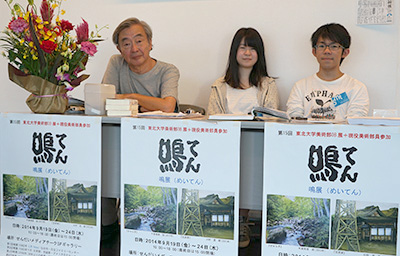