In the Ring with the Sumo Club

Among the range of extracurricular activities on offer at Tohoku University is sumo wrestling. Highly revered among Japanese, sumo is Japan's national sport.

"I decided to join the sumo club because I didn't know if I'd ever have the opportunity to do it again," says 3rd year Arts & Letters student Tomohiro Nojima. "Baseball clubs are everywhere, but sumo clubs are fairly rare."
While most of us imagine sumo wrestlers to be somewhat rotund, Tohoku University's sumo wrestlers come in all shapes and sizes. Past members also include students from Germany and Mongolia.

The club meets three times a week, practising drills to build muscle strength and improve agility. And if you thought some of the movements looked ritualistic, you wouldn't be wrong. "It's to show your opponent that you have no weapons," says 3rd year Agriculture student Shohei Hatori after throwing his hands in the air before a demonstration match. 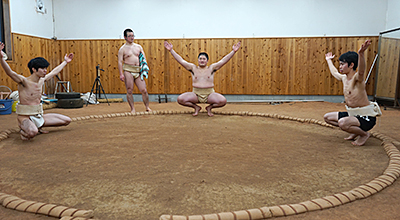 Most, but not all, of the club's members are new to the sport. Third year Science student Genta Suzuki has been sumo wrestling with his twin brother since he was 3 years old. "My Dad did sumo when he at school and now leads a club as a junior high school teacher, so you could say it's in the blood."

While Suzuki is currently ranked number one in the national universities men's division, his brother, who also competes, is considering entering the sport professionally. "But I'm smarter than he is," he retorts, after admitting that his twin usually wins their friendly matches these days. 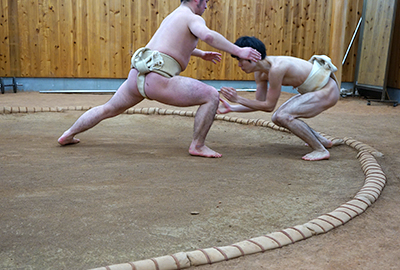 Sumo wrestling was originally performed on the grounds of a shrine, before becoming a professional sport during the Tokugawa period. When the shogunate collapsed and Japan opened its ports to the international community, steps were taken to rapidly modernize the country. This included an official decree encouraging people to cut their topknots and wear their hair in the western style.

These days, sumo wrestlers are among the few remaining wearers of the traditional chonmage hair style. So important is this hair-do that the centerpiece of a sumo wrestler's retirement ceremony includes snipping off the top knot.

Unique to sumo is its round wrestling ring. Packed with clay, the surface is covered with sand and the ring marked out by straw bales. The lack of corners allows for smooth footwork and prevents cornering, which in turn makes a fluid and dramatic performance. The basic rules are that nothing but the soles of the feet are allowed to touch the ring. The moment anything else touches, or if one of the wrestlers steps out of the ring, the bout is over.

Despite the sport retaining many traditions, these days sumo wrestling isn't just for men, but female sumo wrestlers are also welcomed at a non-professional level. 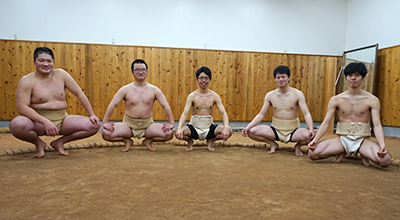 In contrast to the highly regimented lifestyles of professional sumo wrestlers, Tohoku University's students practice three times a week, on Wednesday and Friday evenings from 6:00pm and on Sunday from 10:00am. They recruit new members from any discipline all year round, and are especially keen to have international students join.

To visit the club, send them an email or drop by the club rooms at the Kawauchi Extracurricular Activity Shared Facilities. Directions to can be found on the interactive map: https://www.tohoku.ac.jp/map/en/?f=KW_Z12