Tohoku University President Susumu Satomi attended the 23rd Annual General Meeting of the Association of East Asian Research Universities (AEARU), which was hosted by the University of Tsukuba on September 24.

The AGM is a useful forum for presidents of the member universities - all of which are leading research institutes in the East Asia region - to evaluate activities conducted by the association and to share ideas on science and technology. This year, more than 60 university presidents, vice presidents and senior staff from Japan, China, Korea, Taiwan and Hong Kong participated.

In addition to the regular updates and discussion of future plans, the AGM featured a special lecture on data science education by Professor Sang Kyun Cha of Seoul National University. Researchers from the National Taiwan University and several member universities also presented their latest research findings on the potential applications of Big Data and machine learning. 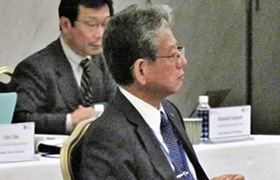 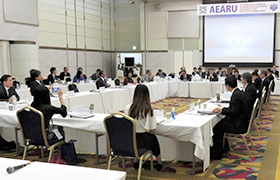 The meeting was an opportunity for President Satomi to strengthen Tohoku University's ties with the region's leading research institutes, and open the door to further joint collaborations.

The next annual meeting will be held at National Taiwan University in the fall of 2018.

AEARU :
AEARU was founded in 1996 with the goal of promoting long-term mutual exchanges between leading research-oriented universities in East Asia. It comprises 18 member universities from around the region. Tohoku University joined in 1998, and President Satomi served as a member of the Board of Directors from January 2012 to December 2015.