A delegation from Tohoku University, led by President Susumu Satomi, attended the Eastern Economic Forum (EEF) held at Far Eastern Federal University in Vladivostok, Russia between September 5 - 7. This was the third meeting of the EEF, regarded as an important event for maintaining and developing economic ties between eastern Russia and Asia.

At the forum, President Satomi participated in the APEC Conference on Cooperation in Higher Education and in a Japan-Russia Business Roundtable discussion. He also delivered a speech at the plenary session of the Japan-Russia Student Forum, which was held concurrently, within the framework of the EEF. There, he spoke on behalf of the host institutions - Tohoku University, Hokkaido University, Far Eastern Federal University and Moscow State University. 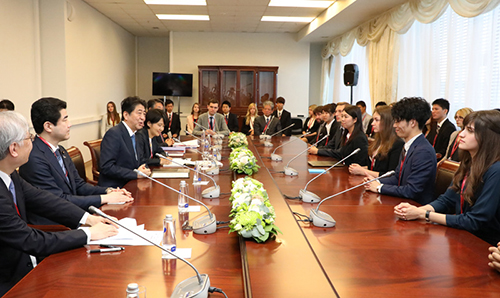 With President Satomi in attendance, the prime minister then met with the students, and received the results of their discussion in a written proposal. In it, the students suggested the establishment of a Japan-Russia Student Association, and for student visas to be waived.

The prime minister told the students that he was delighted with their enthusiasm and ideas and expressed hopes that such engagement and discussions would not only continue but lead to a bright future for Japan and Russia.

The EEF and sideline events were extensively covered by the media, with reports appearing on television, newspapers as well as the websites of the prime minister's official residence and of the central government.