On December 13, the Italian Ambassador to Japan, Gianluigi Benedetti, visited Tohoku University and called in on President Hideo Ohno.

President Ohno welcomed the Ambassador and congratulated him on his appointment and highlighted Tohoku University's active exchanges with Italy through the University's International Graduate Program in Japanese Studies. He also pointed to the possibility of further collaboration in the field of disaster science, and through the use of the next-generation synchrotron radiation facility that is currently under construction. President Ohno then expressed his hopes for future cooperation.

Ambassador Benedetti agreed with President Ohno's comments and stated that, as ambassador, he would like to not only further promote academic exchange between Italy and Japan, but also to build a cooperative relationship that incorporates industries.

After meeting with President Ohno, the Ambassador and his delegation met with Italian researchers at Tohoku University, toured the International Research Institute of Disaster Science and visited the Institute of Development, Aging and Cancer. 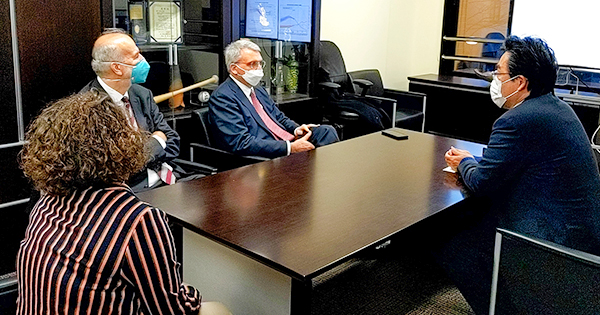