The Third South Africa-Japan University Forum was held at the Tokyo International Exchange Center in Aomi on July 15. 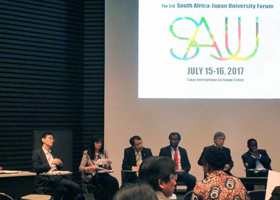 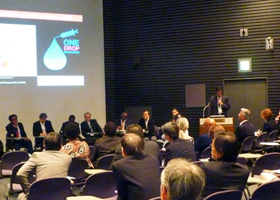 The main theme of the forum was "Cooperation between South African and Japanese universities toward achievement of Sustainable Development Goals." This refers to the United Nations' 17 SDGs* which aim to find solutions to global issues such as climate control, affordable clean energy and the reduction of poverty. The forum examined specifically how universities in both countries can cooperate to help achieve them.

EVP Ueki presented the university's activities at the Tohoku Medical Megabank Organization, which is developing futuristic medical services and helping with the reconstruction of the areas affected by the Great East Japan Earthquake. Professor Kodama spoke on the development of a lymphatic drug delivery system, which is being carried out with researchers from South Africa.