Tohoku and Hokkaido universities have successfully guided nine Filipino engineers in building the Philippines' first microsatellite, as part of a collaborative research contract with the Philippines Department of Science and Technology.

The 50kg DIWATA-1 microsatellite, named after the Filipino word for fairy, was handed to the Japan Aerospace Exploration Agency (JAXA) on January 13, and is scheduled to be put into orbit in early 2016. It will be released from the Japanese Experiment Module "Kibo" - Japan's contribution to the International Space Station.

As part of a three-year satellite development project that started in January 2015, engineers from the University of the Philippines Diliman and the Philippines Department of Science and Technology Laboratory have been accepted as graduate students and researchers at Tohoku and Hokkaido universities. 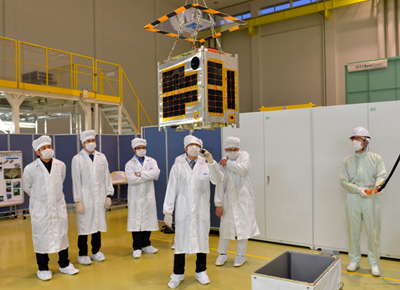 The young scientists assemble two microsatellites, DIWATA-1 and its successor, while simultaneously being taught how to design and use them. Equipped with four types of imaging sensors with differing magnification ratio, they include fish-eye lens cameras and telescopes with ground resolution of 3m.

DIWATA-1 also has a revised model of the multispectral camera using the liquid crystal tunable filter (LCTF) that was first used in outer space on the Rising-2 satellite, launched in 2014 by Tohoku and Hokkaido universities. This new camera is capable of shooting images at 590 bands, significantly superior to an ordinary three-band (RGB) camera. It is the best in its class even when compared to cameras attached to large-scale satellites.

It is expected that these microsatellites will pave the way for the next generation of low-cost, high-performance space applications. The microsatellites can be used in diverse remote sensing applications to monitor weather and natural disasters, track environmental changes, detect agricultural growth patterns and even used in fisheries.

American IT firms are among the many organizations planning to launch up to several thousand microsatellites into space within the next few years. High resolution remote sensing is also a major goal.

Amidst such heated international competition, it is important for Japan to carve a niche, or a presence, by using high-level sensing technology such as the ones found on Rising-2 and DIWATA-1, as well as the data obtained by these satellites. The DIWATA-1 microsatellite is the first of its kind to be manufactured in Japan for overseas use, but there will most certainly be more to come.

For the past three years, Tohoku University and Hokkaido University have been proposing the idea of launching 50 satellites with the cooperation of other Asian countries, and operating them through partnerships. DIWATA-1 is seen as the big, first step.

The budget for the DIWATA-1 project (approximately 800 million yen) was provided by the Philippines Department of Science and Technology. To mark the handing over of the microsatellite to JAXA, a media conference was held at JAXA's Tsukuba Space Center. 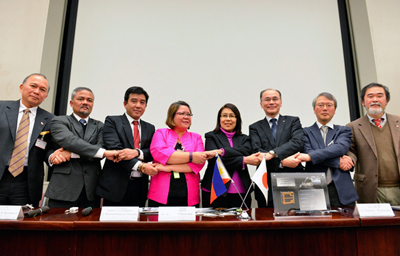