Tohoku University and NTT DOCOMO, INC. have begun research on an app that uses artificial-intelligence (AI) technology to detect periodontal (gum) disease from a photograph taken with a smartphone.

While periodontitis (inflammation of periodontal tissue) is most associated with tooth loss, research now shows that it can also lead to heart disease, strokes, obesity and type II diabetes. So the idea is for app users to be able to take a photo of the inside of their mouth and find out if they need to see a dentist.

"Periodontitis is caused mainly by the accumulation of dental plaque that contains a lot of bacteria. If undectected, the bacteria and their products can get into the blood stream and cause serious health issues," says Keiichi Sasaki, dean of the Tohoku University Graduate School of Dentistry. "Dental plaque can also get into the lungs or chest through saliva. So early detection is especially important in aging societies where aspiration pneumonia is quite common." 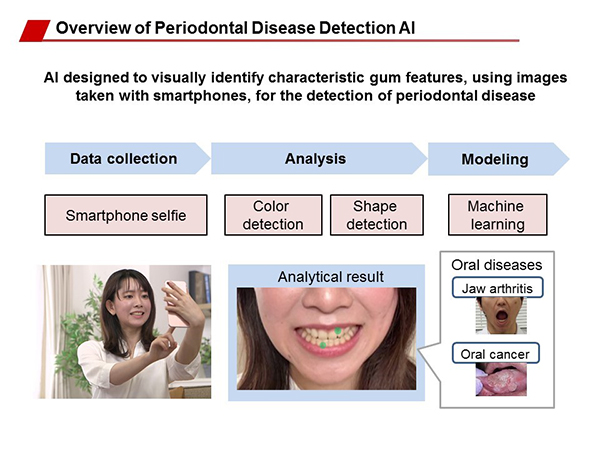 The simple, easily deployed smartphone-based solution proposed by Tohoku University and DOCOMO would analyze gum shape and colour to determine the risk of periodontal disease. By helping users to understand their personal risks, the app is expected to encourage better dental hygiene and improve communication with dentists.

Confirmation of the disease requires going to a dental office to be examined, which is often inconvenient for working people and the elderly. The Japanese Society for Oral Health Magazine estimated in 2018 that only 4.3% of people between the ages of 40 and 70 receive examinations and many do not consult dentists until their symptoms become severe.

"Many people who feel pain in their mouth don't know what the cause is and think it is ok to ignore it," says Sasaki. "This app is meant to help people get a better sense of their oral health, and encourage them to take early action when something doesn't feel right."

The joint-project will combine DOCOMO's expertise in AI technology with Tohoku University's research in oral diseases. The partners also expect to apply their AI technology toward the detection of additional oral diseases, such as jaw arthritis and oral cancer.

A device-based tool for determining disease risks is expected to be launched commercially by the fiscal year ending in March 2023.

Roles in the collaboration