American scientist Mildred S. Dresselhaus, known for her extraordinary work in carbon science, has been awarded an honorary doctorate by Tohoku University. The ceremony was held in downtown Sendai on February 17.

The 85-year old Dresselhaus has been studying the properties of carbon for more than half a century, and had invented breakthrough techniques for studying the individual layers of carbon atoms. She has also devised carbon fibers that are stronger than steel at a fraction of the weight - research that helped usher in the age of nanotechnology.

Nicknamed the Queen of Carbon, Dresselhaus is currently a professor emerita of physics and engineering at the Massachusetts Institute of Technology.

This is only the eighth time that Tohoku University has conferred an honorary degree. A symposium to mark the event was held by the Graduate School of Science at Aobayama Campus the day before the ceremony. 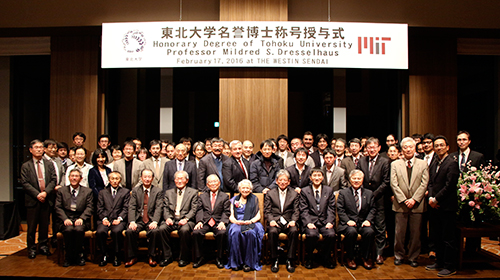