The Japan External Trade Organisation (JETRO), Tohoku University and DATEntre co-hosted a networking event for international students at Katahira Campus on June 20. The event attracted more than a hundred participants and introduced 13 major companies interested in meeting students who have international experience and a global mindset.

"Foreign affiliated companies in Japan say they want to hire high-skilled, high-grade international students, but don't know where to find them," said Tomohiro Kinomoto, JETRO's deputy director. "Students in Tokyo have easier access to multinational companies, but we know that regional areas like Tohoku also have many skilled international students. So this event is for students and companies to meet and exchange information." 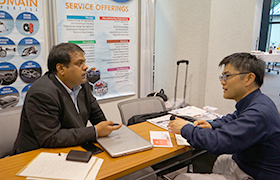 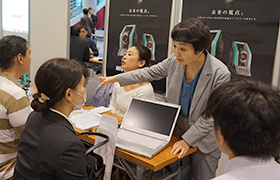 Aside from access, another challenge often faced by foreign students is the complication of Japan's unique and often inflexible system of recruiting. The hiring schedule at major corporations is usually set by the government and the Japan Business Federation, and candidates have to go through a highly choreographed application process.

"This is the first job fair I've attended at Tohoku University that is specifically for foreign students," said Chanon Pornrungroj, a Thai student at the Graduate School of Science, who hopes to land an internship this summer. "I had really good discussions with a few companies here. Mostly we talked about what they do, and they asked me about my background, my interests, and suggested areas that would best fit my skillset. It gave me a lot to think about." 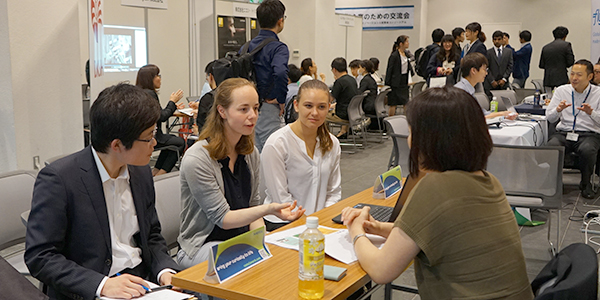 Students used the event to network, make some useful contacts and ask questions.

"Most of my time is spent in the lab so I don't normally get the chance to talk to people on the industry side of things," said Aniko Karpati, a graduate student from Germany studying medical sciences. "The companies I spoke to here seem very open minded about hiring international students and they talked very candidly. I enjoyed chatting with them and getting a sense of what my options will be when I graduate."

Many of the 13 represented companies said they were impressed with the questions the students asked and their attitude towards learning and training.

"I noticed that in Tohoku, many students asked about internships. I see that as a desire to improve themselves and their skills before considering the next level, which is placement," said B. Kamala Manohari, HR business partner for L&T Technology Services. "The desire to learn is there, which is very healthy." 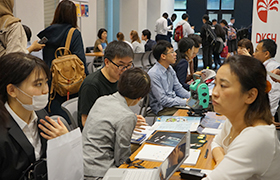 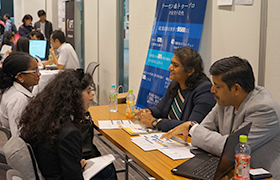 So what advice should international students heed if they're hoping to land a job in Japan -or anywhere else in the world - after graduation?

"If you want to establish a career in a country that is not yours, you have to master the language and understand the culture," said Manohari, adding that newcomers to the job market should also be flexible about trying different domains. "If someone has a degree in mechanical engineering, and there's an opportunity in aerospace, they should be willing to take it, move around and gather experience. The first 10 years of any career is a complete learning phase."