New Members of the Student Council Appointed for AY2022-23

Ten new members were appointed to the Tohoku University Student Council at an official ceremony at Katahra campus on August 2. The new council, which will serve for a year, comprises five undergraduate and five graduate students, including one international student. 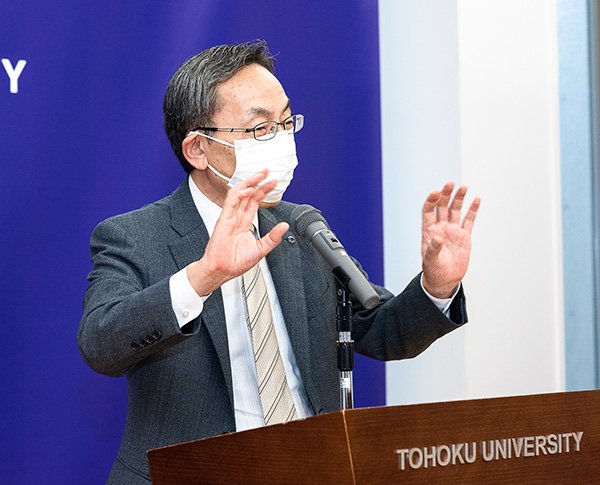 In his speech, President Ohno congratulated the students and outlined the purpose and responsibilities of the Student Council. "I believe that universities exist as places where students can grow. In this sense, dialogue with students is extremely important in order to make Tohoku University a better university," he said.

"We want all of you to know that education is not only found in classrooms, but also in our community and in our daily interactions with each other. We want to encourage in all of you, community awareness, an ability to recognize when something can be better, and the creativity to come up with solutions." 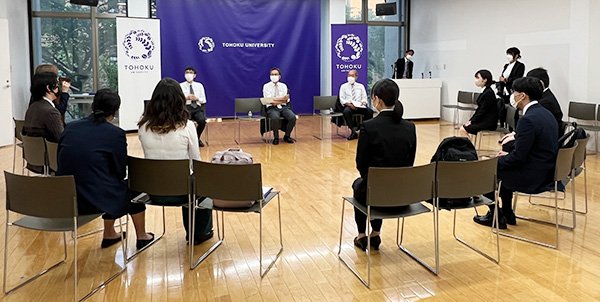 One of the main issues raised by several students was about the cafeteria. With the return of in-person classes, there are now more students at Kawauchi campus, and the cafeteria has become over-crowded, they said. One student asked, "would it be possible to add another place to eat?" 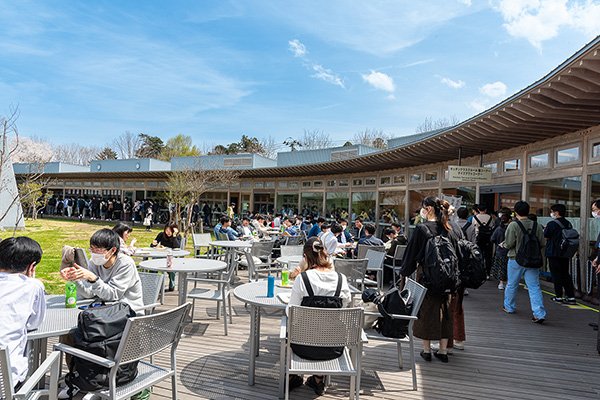 EVP Takizawa acknowledged that "spending 20 minutes in line for food during a one-hour lunch break is not ideal," and said that the university is meeting with cafeteria operators and considering other options such as mobile vendors. "The Kawauchi South Campus is comparatively spacious, so we might be able to use that if we can agree on an appropriate solution."

The students also called for more variety on the cafeteria menu, such as vegan and vegetarian options, as well as healthier meals like salads. It was also suggested that vending machines with food might be helpful for students who work late and cannot get to the cafeterias before they close.

EVP Ueki said that improvements to the cafeteria menus can certainly be made. "We have been offering halal food for muslim students so I think we can also consider vegan and vegetarian food, especially as our campus gets more diverse and multicultural," he said. 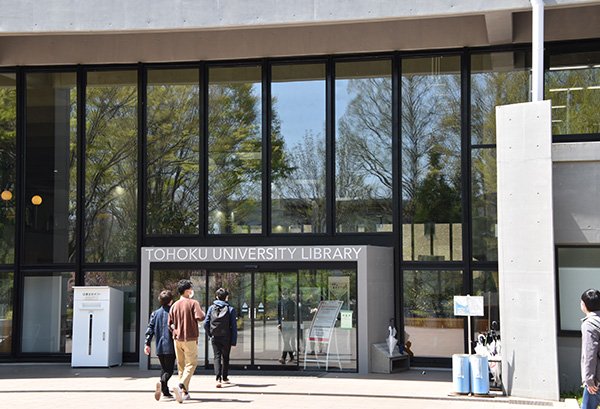 Students also asked for longer hours and more access to facilities such as branch libraries across different campuses. While the main library at Kawauchi campus is open to all students until 10 p.m., one student pointed out that there are restrictions to when and who can use the branch libraries. "It would be better if all students could have more access to all the library branches," she said.

On the academic front, there were questions and suggestions about courses and the transfer of credits, financial support, opportunities to visit laboratories as an undergraduate, and giving all foreign students the option to do an intensive Japanese language course.

One student also suggested that Tohoku University could leverage its digital technology to allow more ideas and expertise to be shared. She spoke of joining online lectures hosted by universities abroad to get different perspectives from a variety of scholars, adding that Tohoku University could perhaps do more to share its expertise online with students around the world.

President Ohno agreed that "we'd certainly like to make our university more diverse and globally accessible using the technology we now have." 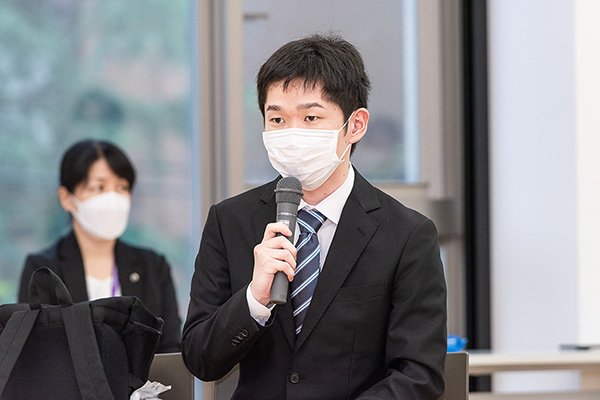 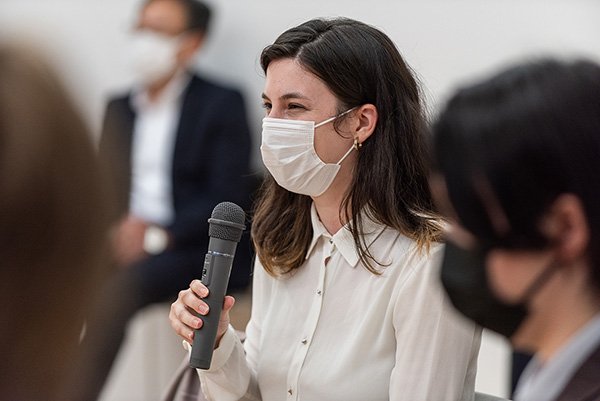 The two-hour session was lively and positive, with the students and university executives speaking freely and often with good humour. In many instances, notes were taken and promises were made to consider possible solutions.

Tohoku University established the Student Council in April last year, the first national university in Japan to do so. It is part of the Connected University strategy, and aims to facilitate communication between students and university management.

Over the course of the year, the new student councillors will hold other roundtable talks and direct dialogue with members of the Education and Research Council, to reflect the opinions, concerns and requests of the student body. The next meeting is scheduled for November. 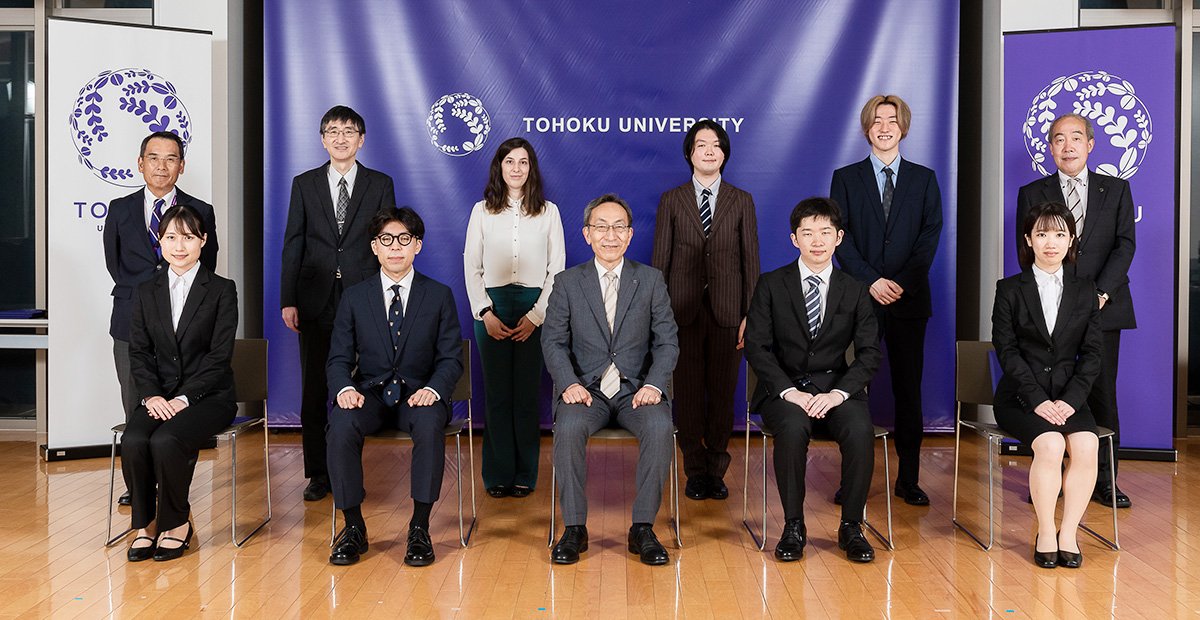