Dissection of the 2015 Bonin deep earthquake

Researchers at Tohoku University's Department of Geophysics, have been studying the deep earthquake which occurred on May 30, 2015, to the west of Japan's Bonin Islands.

The earthquake, which registered at about 670 km depth with moment magnitude (Mw) of 7.9 (Fig. 1), was the deepest global seismic event on record with M ≥ 7.8. It was also an isolated event located over 100 km deeper than the mainstream seismic zones recorded so far (Fig. 1). The event has attracted great interest among researchers because high pressure and high temperature at such great depth make it unusual for earthquakes to generate there. 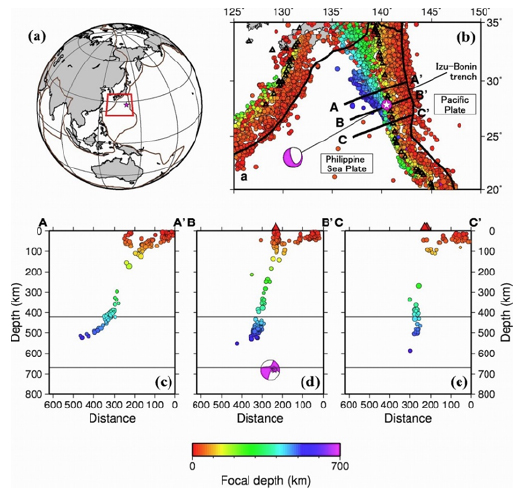 Figure 1. (a, b) The study region and seismicity. The red star shows the epicenter of the 2015 Bonin deep earthquake. Other local events are shown by circles with colors denoting the focal depth. (c-e) Vertical cross-sections of (b).

In the Izu-Bonin region, the Pacific plate is subducting northwestward beneath the Philippine Sea plate. Subduction is a process where one of Earth's tectonic plates sinks under another. To date, several studies have investigated the source location of the Bonin deep earthquake relative to the subducting Pacific plate (slab*1). But there have been conflicting results because the mantle structure in and around the source zone is still unclear.

The Tohoku University team, led by Professor Dapeng Zhao, applied a method of seismic tomography to over five million P-wave arrival-time data recorded by world-wide seismic stations to determine a high-resolution mantle tomography beneath the Izu-Bonin region. The stations included those from the dense seismic networks in Japan and East China.

Seismic tomography*2 is an effective tool for investigating the three-dimensional (3-D) structure of the Earth's interior, in particular, for clarifying the morphology and structure of subducting slabs. Using that method, the team received clear images of the subducting Pacific slab as a high-velocity zone , and showed that the Bonin deep event occurred within the Pacific slab, which is penetrating the lower mantle (Fig. 2). Moreover, its hypocenter is located just beside the eastern slab boundary to the ambient mantle within the mantle transition zone*3. 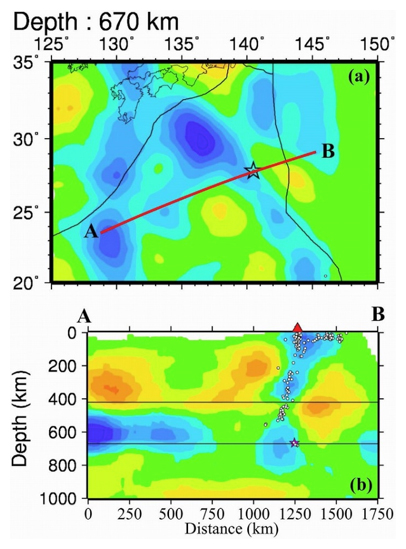 Figure 2. P-wave tomography in the source zone of the 2015 Bonin deep earthquake. (a) Map view at 670 km depth. (b) Vertical cross-section along the profile A-B shown in (a).

They also found that the Pacific slab is split at about 28° north latitude, i.e., slightly north of the 2015 deep event hypocenter. In the north, the slab is flat in the mantle transition zone. Whereas in the south, the slab is nearly vertical and directly penetrating the lower mantle (Fig. 3). 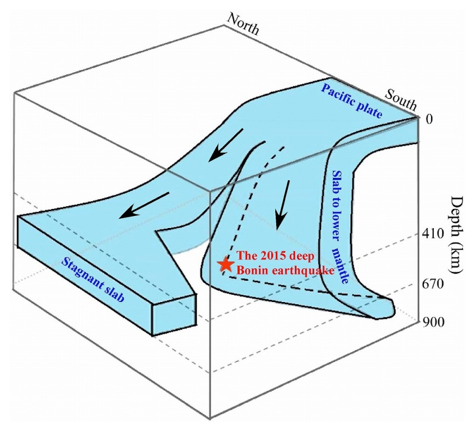 Figure 3. A schematic diagram of the subducting Pacific slab beneath the Bonin region. The red star denotes the hypocenter of the 2015 Bonin deep earthquake.

These results suggest that this deep earthquake was caused by the joint effects of several factors. These include the Pacific slab's fast deep subduction, slab tearing, slab thermal variation, stress changes and phase transformations in the slab, as well as complex interactions between the slab and the ambient mantle. This work sheds new light on the deep slab structure and subduction dynamics.

*2 Seismic tomography: a method to image the three-dimensional structure of the Earth's interior by inverting abundant seismic wave data generated by many earthquakes and recorded at many seismic stations.

*3 Mantle transition zone: a part of the Earth's mantle between depths of approximately 410 and 670 km, separating the upper mantle from the lower mantle.

The authors wish to thank the data centers of the Japanese Kiban Seismic Network, the China Seismic Network, and the International Seismological Center for providing the high-quality arrival-time data used in this study. This work was supported by research grants from the Japan Society for the Promotion of Science (Kiban-S 23224012) and MEXT (grant No. 26106005).