Switched on: a breakthrough for spintronics

Researchers at Tohoku University in Japan have discovered a switch to control the spin current, a mechanism needed for information processing with full spin-based devices.

This is significant because although the technology behind detecting and generating the spin current has been established for some time, a long-missing component in the history of spintronics has been a "spin current switch." It's the equivalent of the transistor used in electronics to enable and disable the flow of electricity.

Spintronics is an emerging field of nanoscale electronics which uses not only the charge of electrons but also the spin of electrons. The technology doesn't require a specialized semiconductor material resulting in reduced manufacturing costs.

Other advantages include less energy requirement, as well as low power consumption with competitive data transfer and storage capacity. It has been used in a variety of devices for information processing, memory and storage - in particular, ultra-high density hard drives and non-volatile memories.

Materials have built-in-mechanisms to enable the electrical detection of the spin current, such as the inverse spin hall effect (ISHE). Using the ISHE, spin current generated by other forms of energy like microwaves (spin pumping) and heat (spin Seebeck effect) is transformed into electrical voltage in the material.

Now, Zhiyong Qiu, Dazhi Hou, Eiji Saitoh, and collaborators at Tohoku and Mainz Universities, have proved that a newly developed layered structure of materials works as a spin current switch. Using the structure, they were able to control the transmission of spin current at a 500% increase at near room temperature.

The tri-layer structure sandwiches Cr2O3 between yttrium iron garnet (YIG) and platinum (Pt). The YIG/Pt pair is a standard combination of materials used to investigate the spin current flow - both are insulators in which electrons cannot flow. YIG, a ferrimagnet electric insulator, generates spin current in response to RF microwave or temperature gradient and Pt, a paramagnetic metal, detects the spin current as an electric voltage via ISHE.

By placing Cr2O3 between the materials, the voltage signal at Pt reflects how much the Cr2O3 layer can transmit the spin current. The researchers investigated the change of the voltage against the temperature and the applied magnetic field.

"We observed a massive reduction in the voltage signal when crossing the temperature at around 300K, at which point Cr2O3 changes its phase from paramagnet to anti-ferromagnet (Neel point)," said Assistant Professor Dazhi Hou. The change of the spin current transmission is a near 500% increase under the application of a magnetic field. This behaviour suggests that the layered structure works as a spin current switch when crossing the Neel point of Cr2O3 or applying a magnetic field.

"Just as the transistor revolutionized electronics by enabling the scalable development of electronic devices, the discovery of a spin current switch is likely to take spintronics in a new direction," said Professor Eiji Saitoh. "It's a significant development." 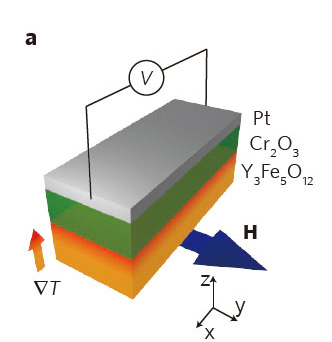 a.Schematic illustration of the out-of-plane
spin Seebeck setup for the YIG/Cr2O3/Pt trilayer device. 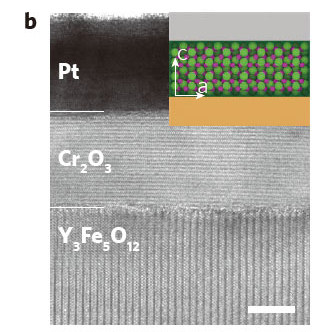