Using hollow-core optical fibre as a sensitive gas cell, researchers in Japan have devised a relatively simple and affordable sensor for monitoring biomarkers in human breath at low concentrations. Trace amounts of gases exhaled through the nose and mouth offer clues to respiratory conditions such as asthma, as well as other easy-to-administer health screening opportunities.

Tohoku University scientists explained how their device works in the journal Sensors, using isoprene as an example. Isoprene is a known indicator of cholesterol synthesis and could offer valuable insights into a patient's metabolism. Breath measurements taken from volunteers throughout the day allowed researchers to track changes in isoprene levels following activities such as exercise or eating.

Breath analysis has attracted much attention because it is non-invasive and has the potential to inform users on a range of health topics. However, detecting biomarkers present at low-concentrations often requires bulky and expensive laboratory systems. The Japanese scientists believe their sensor paves the way for a more portable and affordable solution. 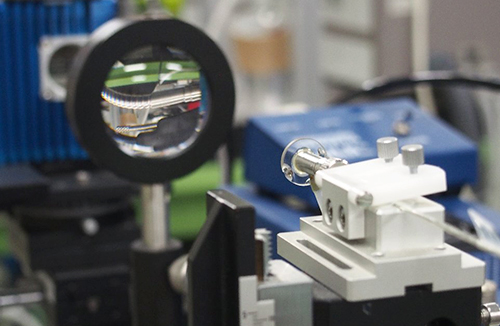 Key to the success of the group's apparatus is a 3-meter-long, hollow-core optical fibre, which is coated on the inside with a reflective film. Participants breathe into a connecting tube that guides the exhaled gases into the fibre's core, where the contents are exposed to laser-driven ultraviolet light. A detector placed at the end of the optical path highlights any portions of the light signal that are absorbed as the ultraviolet emission passes through the gas sample. And this series of so-called 'absorption peaks' forms a chemical signature that reveal which molecules are present. The combination of a long beam-path and high-intensity emission enhances the measurement, so even chemicals present at parts-per-billion levels can be detected.