On the road to creating an electrodeless spacecraft propulsion engine

The universe is made up of plasma - a gas so hot that its particles are electrically charged. This makes it easily influenced by magnetic fields and forces, which can lead to complex behavior. Plasmas are found throughout the solar system in places such as planetary magnetosphere, solar wind and in the tails of comets.

Researchers from Tohoku University have been trying to find out how the plasma flow is influenced by its environment via laboratory experiments. And in doing so, have made headway on research towards creating an electrodeless plasma thruster used to propel spacecraft.

There are many methods of propulsion used to accelerate spacecraft and artificial satellites. And while they all have their pros and cons, electric propulsion is now mature and widely used. The technology behind the electrically powered plasma thruster can deliver large thrust density without the need to expose electrodes to plasma, which cuts down on damage from erosion over time.

While nearly all spacecraft use chemical rockets for launching, once the hardware is in space, propulsion is still needed to manouvere the craft for orbital station-keeping, supply missions and space exploration. Here electric propulsion, with its higher exhaust speed, is preferred as it typically uses less propellant that than chemical rockets. Because it's difficult to make general repairs on spacecraft once they have left Earth, the reliability of their internal components is essential for long-term missions.

Some new concepts of plasma thrusters involve an expanding magnetic field called magnetic nozzle (MN), where the plasma is spontaneously accelerated to propel a spacecraft, when exhausted into space.

To overcome this problem, so that the plasma can be detached from the MN, a scenario in which the magnetic field lines are stretched to infinity by the plasma flow was proposed. Until now, most laboratory experiments have focused on the diverged MN rather than the stretched field.

In their laboratory at Tohoku University, Kazunori Takahashi and Akira Ando took a different approach and successfully observed the spatial transition between the two plasma states diverging and stretching the MN. Here they identified the transition when the stretch of field was detected in the downstream region of the MN, whereas the plasma state diverging the MN (i.e., thrust generation by the MN) was still maintained at the upstream region of the MN. 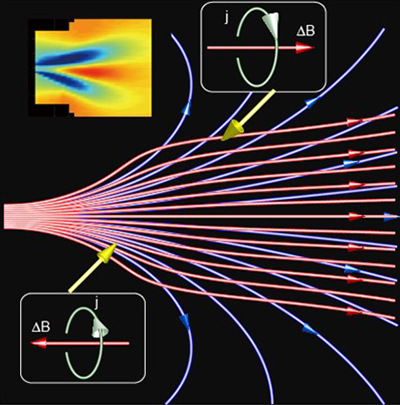 The variation of the field strength is only a few percent of the applied magnetic field strength for now, but this is a significant first step to overcome the problem of detaching the plasma from the MN in the plasma thruster.

Furthermore, this experiment appears to provide some clues about the behavior of plasma in different environments, bridging the gap between the lab and the natural world.