Researchers at Tohoku University have discovered that the calcium ion influx into cells, which can control the various cell activities, can be enhanced by the short-lived reactive species generated in the atmospheric pressure plasma.

This breakthrough is expected to contribute significantly to plasma medicine research - specifically, the elucidation of the mechanisms of plasma treatment for gene transfection, cancer therapy, blood coagulation and wound healing.

The research team has been conducting studies on low-damage and highly-efficient gene transfection - which is an indispensable tool for the generation of iPS cells and gene therapy - using the atmospheric-pressure low-temperature plasma. While it is known that gene transfection is caused by plasma irradiation, the mechanism of the plasma gene transfection has still not been clarified. 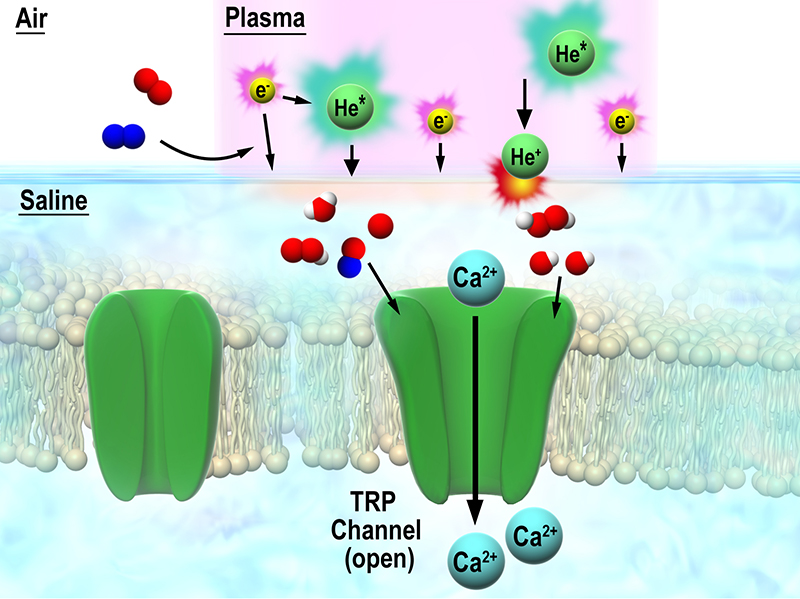 Figure 1:
Short-lived reactive species generated by the plasma enhance the calcium influx through the TRP channels

The calcium influx has been found to be a trigger for the various cell activities. For example, the feeling of pain, heat, coldness in the neuron cell; the sensing of sweetness in the taste cell; and cellular response such as cell proliferation, cell differentiation, endocytosis and apoptosis via the signal transduction or cell signalling.

"It's a breakthrough to have found a way to control the calcium influx using plasma irradiation," says Toshiro Kaneko at Tohoku University's Graduate School of Engineering. "We hope the results of our research will not only contribute to the development of low-damage and highly-efficient gene transfection, but also to improving cancer therapies, blood coagulation and wound healing."

Details of this study were published online on May 13 in the Scientific Reports.