Malaria parasites transform healthy red blood cells into rigid versions of themselves that clump together, hindering the transportation of oxygen. The infectious disease affects more than 200 million people across the world and causes nearly half a million deaths every year, according to the World Health Organization's 2018 report on malaria. Until now, however, researchers did not have a strong understanding of how the parasite so effectively infiltrated a system's red blood cells.

Now, researchers have detailed a comprehensive interaction network map of how malaria traffics between human host cells. They published their results on Sept. 27 in iScience, a Cell Press journal.

The researchers focused on Plasmodium falciparum, the parasite that causes the most severe form of malaria. This parasite infects a host red blood cell, triggering the production of several proteins into the host cell's cytoplasm--the bulk of the cell's mechanics and the liquid in which they're held, ultimately transforming the cell's physical form. Not only does this transformation make the cells stick in place, out of the body's immune response, it also helps the parasite travel to the surface of the cell and infect others. Together, the proteins work to proliferate the parasite, leading to the propagation of the malaria parasite.

"Our study sheds light on the highly complicated interplay between parasite and host proteins in the host cytoplasm," said Kentaro Kato, professor in the Laboratory of Sustainable Animal Environment in Tohoku University Graduate School of Agricultural Science and paper authors. "The work provides a reliable dataset of the interactions connecting dozens of proteins the parasite exports to continue infecting the host cells."

Previously, it was difficult to understand how the parasite works with the triggered proteins because the parasite was predicted to export about 400 proteins, yet another study found that proteins without the specific genetic sequence could also be exported to the cell's cytoplasm. In this study, the researchers opted to focus on one of these proteins without the parasitic mark--skeleton-binding protein 1 (SBP1), which is known to be highly important for malaria to propagate. By studying a protein known to be related to malaria virulence, but that isn't specifically triggered by the parasitic proteins, the researchers could narrow in on specific protein interactions to understand how the infection traffics within and beyond the host cells.

They used highly sensitive mass spectrometry to image the proteins interacting with SBP1 throughout the proliferation process, leading to the identification of several proteins specifically connected to transforming the host cell. 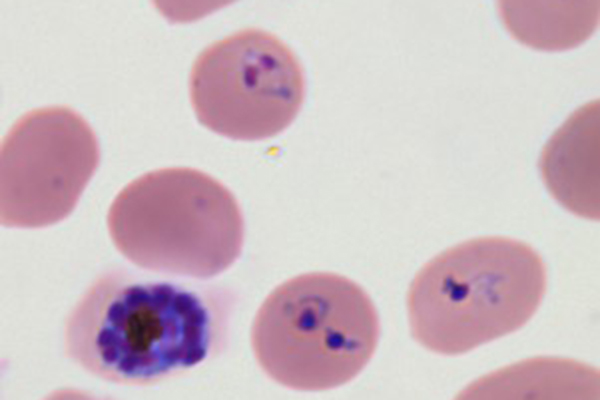 Giemza staining of Plasmodium falciparum the parasite that causes the most severe form of malaria. ⒸKentaro Kato, Tohoku University

"In this study, we developed an alternative approach to identify exported proteins involved in the trafficking complex and in the parasite protein exports," Kato said. "The SBP1 interactions established in our study represent a powerful and invaluable platform to identify exported proteins related to severe malaria caused by Plasmodium falciparum."

The research provided a comprehensive map of SBP1 interactions which shed light on the complex relationships and interplay between host and parasite proteins. The findings also pave the way for further study and discussion on the molecular mechanism of the infections that affect human red blood cells.