CasMab kills cancer without side effects against normal cells

Establishment of cancer-specific monoclonal antibodies (CasMabs) for killing cancer cells without side effects against normal cells.

The research group led by Professor Yukinari Kato, Department of Regional Innovation, Tohoku University Graduate School of Medicine, established the platform to produce a cancer-specific mAb (CasMab). A newly established mAb, LpMab-2, demonstrated dual recognition of a sialylated glycopeptide of podoplanin. LpMab-2 reacted with podoplanin-expressing cancer cells, but not with normal cells, indicating that LpMab-2 is an anti-podoplanin CasMab without side effects.

Podoplanin, a platelet aggregation-inducing sialoglycoprotein, has been reported to be expressed in many cancers including squamous cell carcinomas (head and neck, lung, esophageal), malignant brain tumors, malignant mesotheliomas, and testicular tumors. These reports indicate that podoplanin is an ideal protein for molecular targeting therapy. Targeting podoplanin, however, may lead to severe side effects because, several physiological functions of podoplanin have been reported recently. For example, the development of ectopic lymphoid follicles was dependent on IL-17 and Th17-expressing podoplanin. The activation of CLEC-2 by podoplanin rearranges the actin cytoskeleton in dendritic cells to promote efficient motility along stromal surfaces. The local sphingosine-1-phosphate release after podoplanin-CLEC-2-mediated platelet activation is critical for high endothelial venule integrity during immune responses. Furthermore, the podoplanin-CLEC-2 interaction is important for embryonic blood-lymphatic vascular separation, indicating that podoplanin possesses many critical physiological functions. Therefore, inhibiting the podoplanin function by anti-podoplanin mAbs might be harmful. Here, we established cancer-specific monoclonal antibodies (CasMabs) for killing cancer cells without side effects against normal cells. A newly established CasMab, LpMab-2, reacted with podoplanin-expressing cancer cells, but not with normal cells in immunohistochemistry. Therefore, LpMab-2 is a CasMab that is expected to be useful for molecular targeting therapy against podoplanin without side effects such as respiratory failure, renal failure, or lymphatic edema.

This work was supported in part by the Platform for Drug Discovery, Informatics, and Structural Life Science (PDIS) from the Ministry of Education, Culture, Sports, Science and Technology (MEXT) of Japan; by the Regional Innovation Strategy Support Program from MEXT of Japan; and by a Grant-in-Aid for Scientific Research (C) from MEXT of Japan.

The research results will be published in Scientific Reports on August 1st. The paper's title is "A Cancer-specific Monoclonal Antibody Recognizes the Aberrantly Glycosylated Podoplanin." 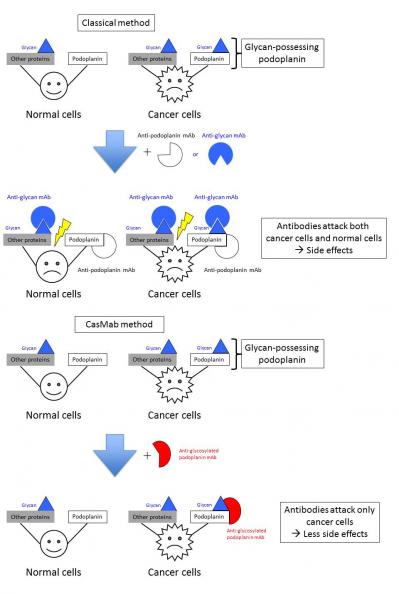 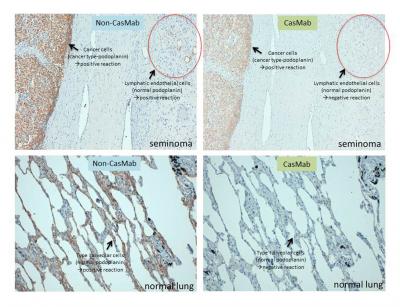