Recreating outer space in the lab : Extending thermodynamics to out of equilibrium electron gas in a magnetic nozzle

Thermodynamics provides insight into the internal energy of a system and the energy interaction with its surroundings. This relies on the local thermal equilibrium of a system. A challenging topic of research has been the application of classical thermodynamics to out of equilibrium systems, e.g., granular gas and materials, the construction of phase diagrams in hard sphere packing in 3D, and plasma.

The expansion of a gas with no electric charge has typically been studied using traditional thermodynamics. Experiments with simple gases can easily be carried out in laboratories; whereas those involving gaseous plasmas of astrophysical and solar interest pose a number of difficulties. Observations near the Sun and at Earth's orbit have been interpreted as a demonstration that solar wind does not expand adiabatically from the Sun as would have been expected for this near collisionless environment. Rather, it expands isothermally, implying that heating of the plasma occurs as it propagates through inter-planetary space.

Many laboratory-based experiments under adiabatic conditions have also shown a nearly isothermal expansion in magnetic nozzles and the relation with astrophysical plasmas has been discussed. However, in these expanding adiabatic systems it appears that electric fields may have a significant effect on the dynamics of the electrons and a very strong electric field trapping the electrons is usually formed at the plasma-wall boundary in laboratory plasmas. A fundamental question then arises: What would happen if there were no electric fields trapping the electrons?

Researchers from Tohoku University and the Australian National University have been trying to find out how the energy state of the plasma is influenced when the plasma interacts with the magnetic and electric fields. The study has implications for the understanding of magnetic nozzle plasma thrusters used to propel spacecraft in space, since the energy conversion is the essential process to determine the thruster performance. 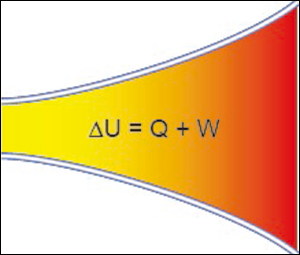 In a laboratory at Tohoku University, researchers Kazunori Takahashi, Christine Charles, Rod W Boswell and Akira Ando have performed a specially designed experiment, which allows the electric field-trapping electrons in the system to be removed resulting in the electrons solely interacting with the expanding magnetic field. The experimental results show the decreasing electron temperature along the expansion, following a near perfect adiabatic expansion of an electron gas when electric fields are removed from the system.

Keeping in mind the first law of thermodynamics, there is presently no heat transfer but work must be done on the walls surrounding the system to lower its internal energy. The expanding magnetic field can be considered the wall to be worked on, but as it is not a physical boundary, no heat is transferred. When the electric fields within the plasma are removed, none of the electrons are trapped in the plasma system leaving the electrons free to interact with the confining magnetic wall: the plasma pressure force does work on the magnetic boundary. This pressure force can also be understood as a Lorentz force generated to propel a spacecraft in a magnetic nozzle plasma thruster.

Hence the decrease in the electron temperature along the expansion results from lowering the internal energy of this adiabatic system with the electron gas doing work on the expanding magnetic field. This implies that classical thermodynamic principles can be extended to the expansion of a collisionless electron gas, being far away from the equilibrium, in a magnetic nozzle.

By removing the plasma-wall boundary in their laboratory plasma and thereby removing the corresponding electric field and electron trapping, the researchers have succeeded in reproducing conditions similar to those in space, i.e., with no boundary. The present results give new insight into plasma thermodynamics and technology applicable to space physics and plasma propulsion development. Further detailed experiments are planned.