Probing Semiconductor Crystals with a Sphere of Light

Tohoku University researchers have developed a technique using a hollow sphere to measure the electronic and optical properties of large semiconducting crystals. The approach, published in the journal Applied Physics Express, improves on current photoluminescence spectroscopy techniques and could lead to energy savings for mass producers, and thus consumers, of power devices.

Semiconducting crystals are used to make electronic devices like microprocessor chips and transistors. Manufacturers need to be able to detect crystal defects and test their energy conversion efficiency. One way to do this is to measure their 'internal quantum efficiency', or their ability to generate photons from electrons excited by an electric current or an excitation laser. Currently available methods limit the sample size that can be tested at a time. 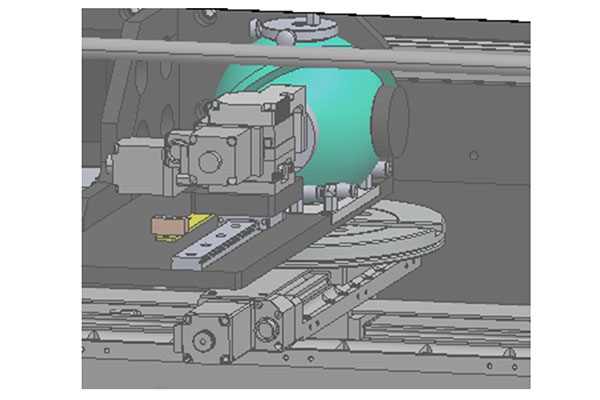 The internal quantum efficiency of large samples of semiconducting crystals can be tested by taking advantage of an integrating sphere without being limited by its size ⒸKazunobu Kojima, Tohoku University

Standard photoluminescence spectroscopy detects the relative amount of light emitted by a semiconductor crystal when an excitation laser is shone on it. Light energy is lost through these excitation and emission processes, so scientists have been experimenting with photoluminescence spectroscopy that uses an 'integrating sphere' to minimize the loss of photons, the elementary particles of light.

Integrating spheres collect both the excitation light and the light emitted from a sample lying inside it, where the light is diffusively reflected inside until it becomes uniformly dispersed. The uniform distribution of light improves the accuracy and repeatability of internal quantum efficiency testing. But this means that the size of the crystal being tested is ultimately limited by the size of the sphere.

Kojima and colleagues found they could still test the internal quantum efficiency of a crystal when it was placed directly outside the sphere, allowing larger samples to be used.

They conducted their tests on a semiconducting crystal called gallium nitride, which
is commonly used in LEDs and is expected to be used in electronic devices because of its superior properties.

"This 'omnidirectional photoluminescence' spectroscopy can be used to evaluate the quality of large-sized crystals or semiconductor wafers, which are essential for the mass production of power devices," says Kojima, adding that this could lead to energy saving and reduce production costs.