Sjögren's syndrome is an autoimmune disease that attacks the tear system in the eyes and salivary glands, leading to patients experiencing extremely dry eyes and mouth. Current treatment options for Sjögren's syndrome are lacking. But a new animal model may help elucidate the pathogenic mechanisms behind the disease, leading to better therapeutic methods.

McH/lpr-RA1 mice are inbred strains of mice. Dr. Shiro Mori, a lecturer at Tohoku University Hospital, and his colleagues have been cultivating them for many years as disease models for the spontaneous development of severe autoimmune arthritis, sialadenitis, and vasculitis.

Kodama, Mori, and Dr. Keiichi Saito, an assistant professor at the Liaison Centre for Innovative Dentistry at Tohoku University's Graduate School of Dentistry, collaborated to analyze the pathogenesis of this mouse model. Their research revealed that the McH/lpr-RA1 mice spontaneously developed autoimmune inflammation in the salivary gland tissue and blood vessels. 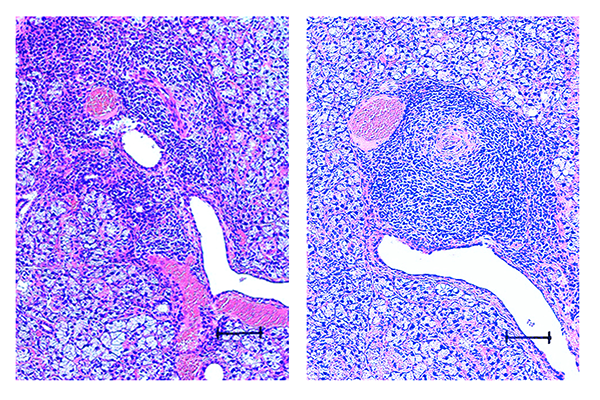 Histopathological findings of spontaneous sialadenitis (left) and vasculitis (right) in salivary glands of McH-lpr/lpr-RA1 mice. Infiltration of inflammatory cells, and destruction of salivary gland tissue and vascular structures can be seen. ©Tohoku University

Further observations of the McH/lpr-RA1 mice unveiled extensive infiltration of inflammatory cells (mainly lymphocytes) in the salivary gland tissue and destruction of the existing salivary gland structure (Figure 1). In addition, inflammation occurred at the foot and knee joint and blood vessels in the kidneys (Figure 2). 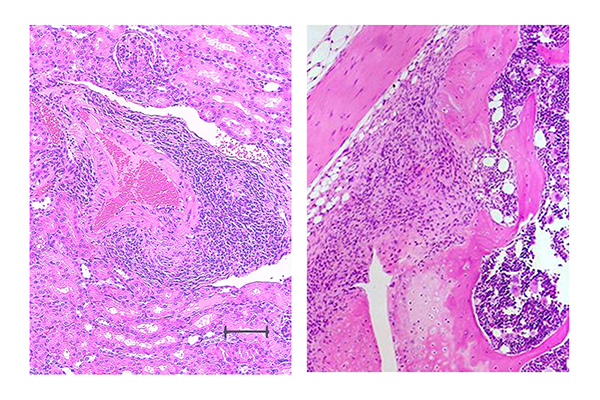 Aquaporin 5, a protein that is critical for saliva production and its secretion, was absent or weakly expressed, indicating an inhibited salivary secretomotor system in the mouse model. The study also suggests that the significant inflammation of salivary glands, along with tissue destruction, contributes to Aquaporin 5 expression being suppressed.

The research group is hopeful the relationship between Sjögren's syndrome and malignant lymphoma could be investigated in the model mice since vasculitis has been associated with malignant lymphoma development in patients with this disease.

Kodama believes that McH/lpr-RA1 mice are a superior disease model for autoimmune sialadenitis when compared to other model mice since they do not develop nephritis and have a longer life span.

With the McH/lpr-RA1 mouse now registered at the RIKEN BioResource Center in Tsukuba, Japan (BRC No. RBRC11160), Kodama and his team are ready to provide this mouse model to researchers who need it for their research. "We believe the McH/lpr-RA1 mouse will reveal more about inflammation in the salivary glands and blood vessels, leading to new treatment methods for Sjögren's syndrome," said Kodama.