Dr. Ryo Egawa, a former research associate at Tohoku University, has ranked in two categories at the prestigious 2017 Nikon Small World international photography competition. He placed 7th in the photo competition and received an honourable mention in the video category.

Nikon Small World is an international light microscope photography competition that started in 1975. This year's winning images were carefully selected from more than 2,000 entries from 88 countries around the world.

About Egawa's winning photo and video

The winning photo and video, which look like a bouquet of flower buds, comprise neuronal circuits in the ganglion behind the eye of an embryonic chick. The numerous bud-like structures are giant presynaptic terminals engulfing the postsynaptic cell soma. Each neuron is labeled with different color by the genetic engineering technique called Brainbow.

The intact morphology of the neuronal circuit hidden in a tiny and whitish tissue less than 1 mm3 was visualized 3-dimensionally by taking advantage of tissue clearing technique and the cutting-edge confocal microscopy, Olympus FV3000.

The laboratory of molecular and cellular neuroscience at the Graduate School of Life Science has been studying the developmental mechanisms of neural circuit using this model system. 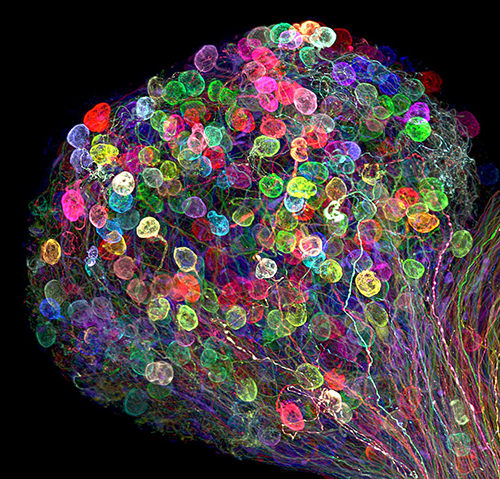