Sparking the next revolution in data science

In a world increasingly reliant on information, highly qualified data scientists are desperately needed. In a first for Japan, Tohoku University has launched two postgraduate programs to meet this global demand. The data science programs build on the university's strengths in the fundamentals of computer science and mathematics and their application in electrical engineering, materials science, medical science and disaster management.

"Breakthroughs in data science occur every two to three years, and are almost always initiated by young people," says Takeshi Tokuyama, dean of the Graduate School of Information Sciences. "Japan must offer a good environment for stimulating the next revolution in data science." 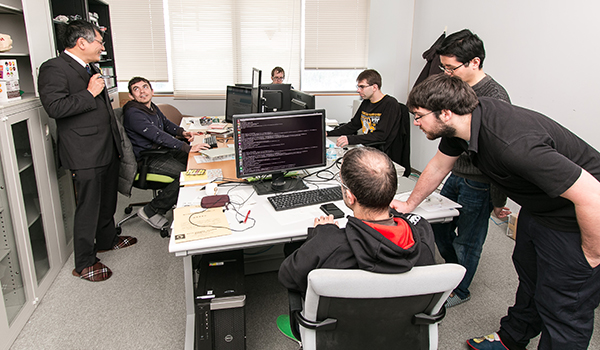 Takeshi Tokuyama from the Graduate School of Information Sciences believes in nurturing and guiding the next generation of data scientists to spark new discoveries.

Data science is a cross-cutting field whose practitioners develop the tools to extract meaningful and useful information from huge amounts of data. "Data science assists us in making good decisions," says Tokuyama.

Over the years, these tools have come to support almost all aspects of our lives. Every search on Google uses the PageRank algorithm to index billions of websites on the Internet. Facebook filters and personalizes posts and comments made by its close to 1.5 billion active users. Deep-learning software can now defeat professional players at the ancient game of Go -- the last bastion of human superiority in games. And even more exciting advances are on the horizon, from driverless cars to remote health monitoring.

Data science is also causing a revolution in research, adds Tokuyama. Traditionally, science has been founded on the three paradigms of observation, experiment and theory. But now, scientists are collecting so much data that a fourth paradigm of sifting and visualizing data is required. "Newton developed his laws of motion to analyze large amounts of astronomical measurements," says Tokuyama. "But even a genius like Newton cannot analyze terabytes of data."

In October 2015, Tohoku University launched a combined five-year master's and doctoral degree program for international students focused specifically on data science. Every year, 10 students from across the globe will have the opportunity to acquire highly specialized skills in data science to address pressing societal problems. Their tuition and living costs will be covered by a fellowship from the Japanese government. Since classes are offered in English, proficiency in Japanese is not essential.

In April 2016, the university expanded the program and established a dedicated graduate school for Japanese and international students alike. The school will be one of several international joint graduate schools under Tohoku University's Global Initiative, which is supported by the Japanese government's Top Global University Project to raise the global rankings of select universities. These graduate programs make Tohoku University the only university in Japan to offer postgraduate courses in data science. 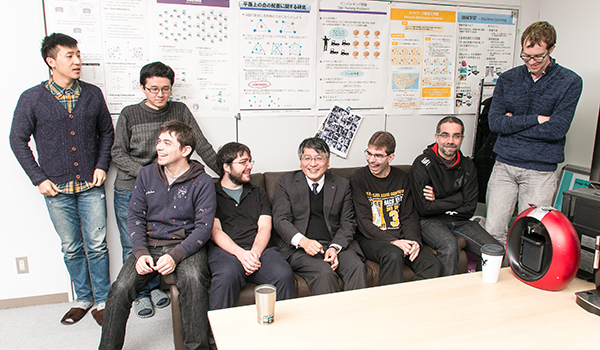 At Tohoku University, postdoctoral researchers from all over the world study the science of extracting meaningful information from huge amounts of data.

Students in the program will benefit from Tohoku University's wide range of expertise in the field -- from the basics of statistics and computation, to real-world applications.
The fundamentals cover areas such as the theory of algorithms and computer science; the science of biomedical information; natural language processing and web analysis; and transportation and logistics analysis.

The applications extend to medicine, disaster management and sport. Masao Kuwahara, also a professor at the Graduate School of Information Sciences, is using data obtained during the tsunami of March 11, 2011 to analyze the traffic jams that formed as people fled the disaster. The university is home to the Tohoku Medical Megabank, a huge repository of medical and genome data that was created in response to the loss of many medical records during the tsunami, which has yet to be analyzed.

The graduate school is also currently working with the professional baseball team Tohoku Rakuten Golden Eagles to analyze their records.

Tokuyama worked on a data-mining project at the global technology company IBM for 12 years before joining Tohoku University and is keen to use his connections to establish collaborations with industry partners.

Tokuyama sees the role of faculty affiliated with the graduate program more as supervisors nurturing and guiding young data scientists. "This has been the history of data science till now: young people discover, while senior people support them and decide whether they are heading in a good direction." 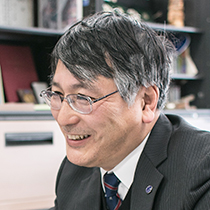