Exploring the Earth and its neighbors

Japan is an exciting place to study Earth science. The archipelago is one of the most geologically active regions in the world, with reminders almost daily of the planetary dynamics stirring below and above it. The effects can be dramatic and dangerous: landslides, earthquakes, volcanic eruptions, yellow sandstorms blowing in from China and extreme weather due to climate change.

A new graduate program in Earth and Environmental Sciences at Tohoku University will give students the opportunity to witness some of these phenomena first hand. "One of the advantages of studying at Tohoku University is that we place a strong emphasis on observation, field research and experiments," says Tadahiro Hayasaka, a climatologist and dean of the Graduate School of Science and Faculty of Science. "We adopt a hands-on approach."

This includes visits to active volcanoes in Japan's southern island of Kyushu. "Mount Aso and Sakurajima in Kyushu are erupting very actively. It's an excellent chance for students to look at real volcanic eruptions," says Michihiko Nakamura, a volcanologist and professor at the Department of Earth Science.

Together as director and deputy director, Hayasaka and Nakamura will head the joint master's and PhD degree, which was launched in October 2016.

One of many planets

Earth science deals with the origin, development, structure and processes of Earth and its neighbors. It is a very broad field encompassing a wide range of sub-disciplines. This diversity is reflected in the 12 research groups at the Department of Earth Science, covering everything from the evolution of the early Solar System, to seismology, geochemistry, atmospheric science and ocean science.

Hayasaka studies aerosols; tiny particles suspended in the air that can have huge effects on weather and climate. Without aerosols, the relative humidity must exceed 300 per cent for water droplets to form, falling to slightly more than 100 per cent when aerosols are present. Aerosols also scatter sunlight, which makes them an important component in climate change models.

Meanwhile, Nakamura is investigating carbon dioxide emissions from volcanoes. While volcanoes contribute only about 1 percent of the total global carbon dioxide emitted, they provide a direct link between underground reservoirs of carbon in the mantle and atmospheric carbon dioxide. On geological time scales, this carbon cycle is very important indeed. 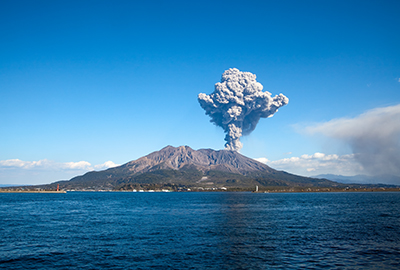 Caption: Japan is the perfect destination for studying planetary dynamics first-hand, including active volcanic eruptions of Mount Aso and Mount Sakurajima (above) in the southern island of Kyushu.

Research at the department is not restricted to terrestrial phenomena. "Earth is a fascinating planet, but it's only one of many," says Hayasaka. "To understand the Earth system, it's very helpful to survey other planets. More than 2,000 exoplanets have already been discovered."

One professor at the department, Tomoki Nakamura, is analyzing samples of a near-Earth asteroid obtained by the Japanese spacecraft Hayabusa. And with its successor, Hayabusa2, scheduled to return to Earth in 2020, some lucky students could get to analyze new samples in the very near future.

The new joint-degree program at Tohoku University will accept 10 students each year who have a background in Earth sciences. After completing a two-year master's course, they will progress to a three-year doctorate program. The course will be open to both overseas and local students. Core subjects will be given in Japanese, but Earth-science electives will be taught in English.

As part of the course, students will need to complete a research project, which will be jointly supervised by two researchers: one at Tohoku University and one at an overseas partner institution.
The department has established strong links with the University of Bayreuth in Germany, which specializes in ultrahigh-temperature experiments that mimic conditions deep within the Earth. It is also collaborating with the University of Hawaii on studies of volcano, ocean, and atmospheric sciences, and with the University of Florence to observe active volcanoes.

Tohoku University offers the chance to witness the dynamics of the Earth in close proximity in Japan and to investigate distant celestial phenomena of cosmological significance. 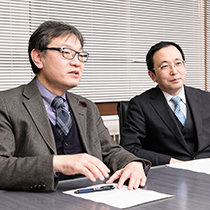 Professor of Volcanology and Geofluids at the Department of Earth Science