Taking memory for a spin

In 2014, Hideo Ohno and his team at Tohoku University fabricated the smallest spintronic device, with a diameter equivalent to the thickness of a cell membrane - 11 nanometers - and made up of layers the thickness of a sugar molecule - 1 nanometer1. The minuscule technology ran on little power and could store information even without a power source - must-have capabilities for next-generation computer memories and integrated circuits.

It had taken Ohno's team years of searching for the right materials and developing appropriate processing technologies to reach this point. At the nanoscale, says Ohno, even something as simple as measuring a device's diameter can prove challenging - "an electron micrograph of the device looks like Pluto billions of miles away."

But the world of nanoscale spintronics has captivated Ohno for close to three decades now. "The thing that fascinates me most about spintronics is that there has been a constant flow of new discoveries - surprises - that we never could have anticipated," he says. "You flip a stone and you find something unexpected." 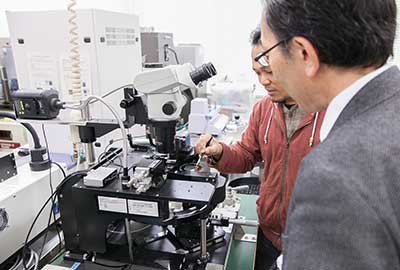 He sees his work as following in the footsteps of "two giants" at Tohoku University - Junichi Nishizawa, known in Japan as 'Mr. Semiconductor' for the three most important components underlying optical fiber communication (the PIN junction, laser diode and optical diode), and Shunichi Iwasaki, who invented perpendicular magnetic recording, a technology now universally used in hard drives.

When Ohno first began his research in the late 1980s, semiconductor technologies and spintronics were worlds apart and hard to reconcile. While most integrated circuits are made of semiconducting materials such as silicon or gallium arsenide that are nonmagnetic, mass storage devices are made of magnetic materials with crystal structures that are incompatible with these semiconducting materials. "I wanted to integrate the two by making magnetic semiconductors that could be used in devices," explains Ohno.

Then, in 2000, he discovered a way to electrically manipulate the ferromagnetic properties of a semiconductor3. And, in 2010, while further exploring the electric-field control of magnetic properties, Ohno's team found a way to magnetize the materials in a perpendicular direction - a finding that led them to develop the smallest spintronic device4. The breakthrough came when the team discovered that they could achieve similar effects on magnetic metals as they could on magnetic semiconductors. 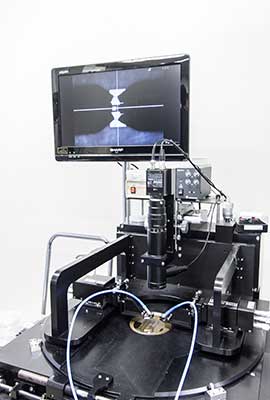 Figure 2:
A system for testing the properties of spintronics components could lead to next-generation computer memories.

Ultimately, Ohno hopes to use spintronics to develop memories that retain recorded data even when no power is supplied to them, known as non-volatile memories. Such memories are currently available as flash drives and hard-disk drives, but are yet to be incorporated in integrated circuits - a reality that hits home every time you rue the loss of unsaved data after your computer crashes. Besides making such frustrations a thing of the past, non-volatile spintronics memory based on a type of spintronic device known as magnetic tunnel junctions can also dramatically reduce the power consumption of computing and data storage. Ohno's smallest spintronic device was a magnetic tunnel junction.

"Data centers, such as those established by Amazon, Facebook and Google, are very, very power hungry," explains Ohno. "They generate so much heat that they have to be located near rivers - they're like nuclear power plants."

Much of this power consumption arises because power has to be supplied to volatile memories even when they're not being accessed. "Only about 10 per cent of memory and logic is active at any time; the remaining 90 per cent is awaiting instructions, but you still have to supply it with power," says Ohno. In contrast, as Ohno's memory devices are non-volatile, they do not require power when idle.

Tohoku University offers many advantages to Ohno's research, most notably, its close relationship with industry partners. In particular, Tokyo Electron, the third-largest semiconductor manufacturer in the world, is taking a great interest in the research being done at Tohoku University, evidenced by their donation of a state-of-the-art clean room. "Tohoku University is the only university where you can experiment with 300-millimeter silicon wafers and get results with spintronic components combined with ordinary semiconductor transistors," Ohno says, referring to the industry-standard wafers used by major chip manufacturers.

In February 2015, Tohoku University signed an agreement with Johannes Gutenberg University Mainz to establish a joint-degree program - a first for the university - particularly for PhD researchers in the field of spintronics. "Collaboration works best when you exchange people," says Ohno.

Looking ahead, Ohno is excited about the potential of spintronics and what will be discovered next. The only thing he is absolutely certain of is that there will be more surprises. 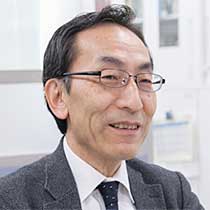