Surrogacy and the Law

Medical advancements mean that there are more options than ever before, for couples who need help to have a baby. This would seem to be a good thing for Japan, where the birth rate has been in decline for years.

But here, the law has not kept pace with technology in recognizing the children produced by such reproductive treatments including surrogacy.

Professor Noriko Mizuno, former faculty head at Tohoku University's School of Law, explores the reasons why, and the complications involved in changing the law - and the mindsets - in a country steeped in tradition.

Under Japan's Family Register System, a child born is incorporated into the parents' family register. And it is an absolute requirement that only blood-related parent-child relationships are put on the record.

Since only blood lineage is recognized, there is significant conflict over the use of medical technology for reproductive treatment. Currently, the operation of the technology is controlled solely by self-imposed regulation by the Japan Society of Obstetrics and Gynaecology.

Supporters of alternative reproductive treatment call for greater freedom of self-determination. They argue that an individual's freedom of action should be respected even if the action is disapproved of by the majority.

Detractors however, warn that using Artificial Insemination by Donor (AID) or a surrogate mother, could lead to significant social and family problems, as there is no guarantee that the mother can give a child born the unconventional way her unconditional love. Other potential dangers include the child facing an identity crisis, and surrogates being exploited.

Mizuno argues that the issue of the parent-child relationship in Japan is too important to be left to ever-changing social values. And for medical technology for reproductive treatment to be accepted in Japan, there must first be laws that can protect not just the children, but also the women who bear the weight of maternity and labor for others.

There have been, over the years, preparations for introducing legislation on surrogacy and reproductive rights, but no law has yet been passed.

Mizuno is not surprised. She argues that the legal parent-child relationship currently defined by Japan's Civil Code represents a system which is based not only on blood lineage, but also on considerations of complex and diverse demands, including the need to give a child a legal parent and to safeguard the identity and status of the child.

She believes that designing a new parent-child law creates potential problems that include the temptation to falsify information to hide the fact that a child is born using medical reproductive treatments. The need to hide the status of an adopted child is significant in Japan as the relationship with the blood parents would be visible in the adopting parents' family register.

There is also concern that it would be difficult to protect a child should his status be challenged in court, especially in cases of inheritance. For example, with knowledge that someone was born by AID, it would be possible to file a lawsuit against that person seeking to confirm the non-existence of a true parent-child relationship.

With so much at stake, she adds, more deliberation is needed to ensure that current laws are not diluted and that any changes introduced must strengthen the protection of the people the laws are meant to protect. 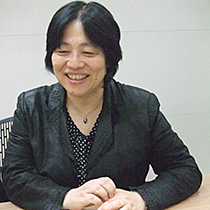 Prof. Mizuno has been a member of several working groups of the Legislative Council of the Ministry of Justice in Japan.