Brain buster: Noriko Osumi is uncovering the links between genetics and brain development

The human brain is sometimes described as the most complex structure in the known universe. It's something we know surprisingly little about, even in 2016.

One of the explorers of this scientific frontier is Noriko Osumi, a professor at Tohoku University's Department of Developmental Neuroscience. She's fascinated by everything brain-related - from how brains have evolved through time, to how they develop in the womb. Her research is centered on highlighting the connections between the growth of brain cells, and both behavior and developmental disorders.

Osumi and her colleagues recently showed that when pregnant mice consumed more of a fatty acid known as omega-6, often found in oils used in deep-fried food, and less of another known as omega-3, which is abundant in fish, they gave birth to pups with smaller brains.

Premature aging of fetal neural stem cells was believed to be involved. Furthermore, the pups exhibited abnormal behavior such as high levels of anxiety after they grew into adults even though they were fed a normal diet postnatally.

"The imbalance seen in the mice doesn't really occur in the everyday life of humans, but the study underscores the importance of omega-3 in fetal development," says Osumi. "Unfortunately, pregnant women sometimes avoid eating fish due to fears of toxins such as mercury."

The research, published in the journal Stem Cells, was conducted using transgenic mice that can convert omega-6 to omega-3. Fatty acids are another interest of Osumi's because of their relationship to PAX6, an important master regulator protein that can control brain and eye development by switching other genes on and off. Osumi helped pioneer knowledge of PAX6 after finding a mutation in the gene in a rat pup born without eyes or a nose.

She made that discovery while doing post-graduate work at Tokyo Medical and Dental University. She now has more than 1,000 rats and mice to work with in her lab, where about 15 students, postdocs and assistant professors study brain development. 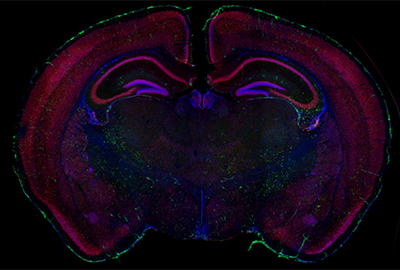 Image showing the vertical brain section of the mouse.

Her team is also interested in PAX6 as a risk gene for autism in combination with the effect of paternal age. Autism prevalence is now about 1 to 2 percent and researchers hope that a deeper understanding of the genetics and epigenetics involved could lead to treatments.

"There could be some kind of solution because the underlying mechanism includes epigenetics," says Osumi, referring to the way gene expression can undergo change. "Some kind of epigenetic drug could be used on the father or during in-vitro fertilization. But we're talking about a future scenario."

To reach those kinds of goals, Osumi is working with partners at the Tohoku Medical Megabank, a large-scale effort aimed at gathering samples from 150,000 people in the Tohoku region. It will focus on analyzing genomic data, particularly genes that cause diseases. One accomplishment so far has been the whole-genome sequences of 1,070 healthy Japanese and the compilation of a Japanese population reference panel known as 1KJPN. It could advance genomics-based medical care as well as identify genetic variants that can determine whether clinical treatments will help or harm a patient.

Osumi's work also involves collaborations across borders. The fatty acid study, for example, was done with fellow researchers in Canada and the U.S. Her lab participates in a scientific symposium held every year and a half. Participants include Tohoku University, the Japan Society for the Promotion of Science and the U.S. National Institutes of Health, which has hosted grad students from her lab.

"With collaborations, we get to have higher quality publications because of multiple minds working together. Most importantly, we meet and connect with people who will be a crucial part of our careers," says Cristine Casingal, a PhD student who recently joined Osumi's lab.

"Developmental neuroscience is new for me, but I know I will gain new knowledge and new techniques that will be beneficial in my future endeavors." 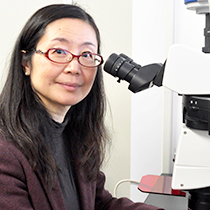