Most people are lucky not to have experienced a major disaster first hand. But Professor Satoshi Tadokoro has found himself at the centre of two of the worst natural disasters in Japan's history.

In 1995, when western Japan was rocked by the Great Hanshin Earthquake, Tadokoro was an associate professor working on artificial muscles and robotic mechanisms at Kobe University.

"So many people died," says Tadokoro. "A student of mine was buried in the rubble for more than 4 hours. Fortunately, he survived, but it was a really heavy and terrible experience for me."

That sense of helplessness was a defining moment for Tadokoro, who decided then to focus his research on disaster and rescue robotics. "At that time, no one in the world was doing this kind of research. I felt that if no one started, then there will never be a solution. I didn't know what was possible but I thought that we had to at least start."

Tadokoro is now a professor at Tohoku University's Graduate School of Information Sciences. When the Great East Japan Earthquake and tsunami devastated the Tohoku coast and brought the country to a halt in 2011, he knew how he could help.

The Great East Japan Earthquake was the first disaster where robotic systems were widely used.

Quince, an unmanned ground vehicle, was the first robot sent into the upper floors of the nuclear reactor building at the troubled Fukushima-Daiichi Nuclear Power Plant after tsunami waves disabled the reactors' power supply and cooling system. With radiation levels too high and dangerous for human workers, Quince was used to gather vital information.

Developed by a research group led by Tadokoro's team at Tohoku University, Chiba Institute of Technology and International Rescue System Institute, Quince was chosen for its ability to handle staircases and bumpy surfaces, as well as withstand high levels of radiation.

"At that time the temperature inside was more than 90 degrees," says Tadokoro. "TEPCO wanted to use a secondary cooling system but they didn't know the condition of the pipes and valves because they couldn't go to the 2nd or 3rd floor. So Quince went up to get the information."

Since 2011, several updated versions of Quince have been used in various efforts to stabilize the situation at the plant.

"First responders are sometimes limited by what they can do," says Tadokoro. "They cannot enter heavily contaminated places or very narrow spaces. And they cannot fly. In all these cases, robots can help accelerate or make the rescue work more efficient. The first human responder is the main driver of the rescue activity and robots are the tools."

Another promising robot developed by Tadokoro's team is the Active Scope Camera - a thin, serpentine robot with a camera attached to its head. It is covered with plastic cilia that vibrate, allowing it to slither through tight crevices and push forward on uneven surfaces. 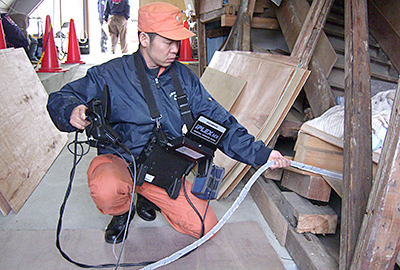 The Active Scope Camera is a moving fiberscope that can enter long, narrow spaces.

In a world first, the ASC successfully helped in the forensic investigation of a collapsed building in Jacksonville, Florida in 2008. The ASC penetrated 7 meters into the rubble through gaps as narrow as 2.5cm. The camera relayed information such as the shape and direction of the cracks to the investigators.

Tadokoro's team is continuing to improve on the ASC, and has recently collaborated with Japanese construction company Shimizu, to develop RoboScope that is a combination of the ASC and a crane.

ImPACT and the future

In recognition of his achievements, Tadokoro has been selected as a project manager in the government's Impulsing Paradigm Change through Disruptive Technologies Program (ImPACT).

The programme encourages high risk and high impact R&D that would effect change in Japan's technology industry and reinvigorate its economy. Tadokoro's project - called the "Tough Robotics Challenge" - aims to establish remote autonomous robotics that can operate in extreme environments.

"Current robots are too delicate. If the weather is bad - if there's fog or snow - it's difficult for the robots to see. If the winds or rains are too strong, the UAVs cannot fly properly. But we need the robots to work even in these tough conditions. So that's where we need to improve the technology, to train the robots for a tougher existence. 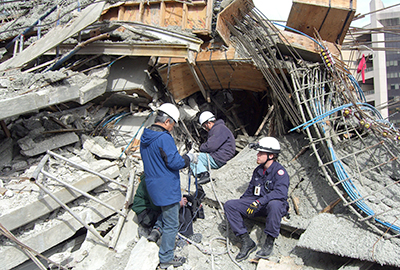 Around every disaster, there is a preparatory phase, a response phase and a recovery phase. In every phase, says Tadokoro, robots can be useful and effective.

Even for disaster specialists, robotics is a new solution, and a huge gap still exists between the technology and real life application.

To close that gap, Tadokoro suggests that rescue technology should also have practical, commercial use. "For example, if our solutions can be adapted for use in construction sites or in the maintenance and inspection of pipes and infrastructure, they can make money. The market size for that is much larger and it can attract investment for research."

Ten years ago, Japan's robotics industry was among the best in the world, but Korea, China and Europe are catching up. Tadokoro insists that the global push for robotics innovation is not a race among nations, but a challenge to create solutions for everyone in the world.

"At the end of the day it's about turning a research idea into a solution. In science, sometimes the most important thing is to know the phenomena. But robotics is not like that. We want to solve problems, to make people more effective, more comfortable. That is what Robotics is about." 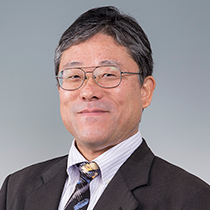