Tohoku University and the Spintronics Revolution

Spintronics is about utilizing both spin and charge of the electron in solid-state devices, and is, indeed, a promising enabling technology. For example, the Nobel-Prize winning Giant Magnetoresistance Effect has been applied to hard disc drives and MRAM, which have enormously expanded our data storage capacities. More recent advances of spintronics, discoveries of exciting new spintronics-related phenomena and their applications, are also staggering, and the impact of Tohoku University researchers' contributions has undoubtedly been ground-breaking. One such influential researcher is Professor Eiji Saitoh of the Advanced Institute of Materials Research (AIMR) at Tohoku University. 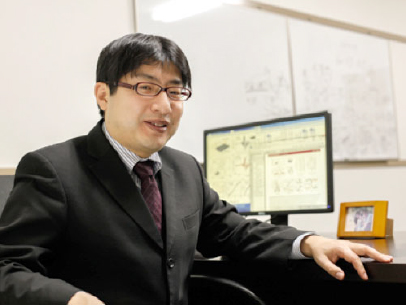 Our modern high-tech society is built and sustained by the use of a countless number of functional materials. Whether natural or man-made, most of their unique properties are dictated by one element that resides inside of such smart materials. Now, you may ask what that important element is: The answer is electrons!

The electron is a subatomic particle that possesses two properties--Charge and Spin. Charge, which has two signs, positive and negative, is familiar to many of us. Electric currents can be understood in terms of flow of charge; on the other hand, spin might not sound so popular, but it is no less important. The directional nature of spin, up and down, is essential in considering magnetism. Historically, as can be recognized in the Maxwell's equations,these two properties were treated separately. However, charge and spin are, in fact, two undivided features on the nanometer (nm: 10-9m) scale, where behaviors of the electron are different from those observed on our customary every-day life scale of above the micrometer range.

It was nanotechnology that helped break the walls separating charge and spin. With nanotechnology at hand, we became able to study and work on electrons on the nanometer scale, and as a result, we finally started to integrate charge and spin when we consider phenomena arising from the electron. Consideration of the electron's intrinsic spin and associated magnetic moment with its charge did, in fact, upset the conventional materials science, and has already led to the discoveries of a number of exciting new phenomena. We are now witnessing the burgeoning of the new research field and technology, named spintronics, which some people metaphorically call the modern-day alchemy.

In 2006, Saitoh made a seminal discovery that has significantly advanced spintronics research: Saitoh and his group independently discovered a new physical phenomenon, the inverse spin-Hall effect (ISHE). His team demonstrated that a spin current, a flow of directional information of the spin, can be converted to an electric-charge current by detecting a charge current in the platinum (Pt) layer when they injected a spin current from the nickel-iron alloy (Ni81Fe19) layer of a thin nano-meter scale bilayer film of Ni81Fe19 and Pt.

The implication of this discovery is profound: this discovery established a way to measure a spin current in the form of electric current or voltage. Until then, we were not able to discuss spin currents in a scientifically meaningful way as it was quite difficult to evaluate in terms of physical quantity. The discovery of the ISHE and the establishment of measuring methods of spin currents allowed us to combine spin current technology with the conventional electronics based on charge current, and opened up a new area of investigation, the field of spin current physics.

Within 10 years of Saitoh's initial discovery, more than 10 important new phenomena associated with spin currents were unraveled, such as the spin Seebeck effect (SSE), which is another monumental contribution from the Saitoh Group. 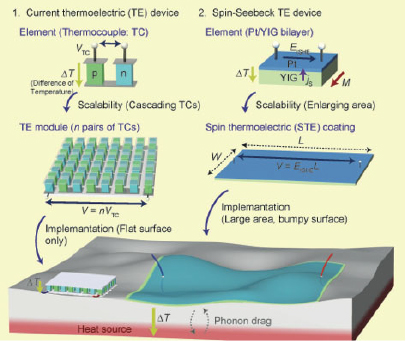 Figure. Comparison of conventional p/n thermoelectric devise 1 and spin-current-driven thermoelectric coating technology 2: Conventional thermoelectric devices are composed of meticulous arrays of p and n components on a flat surface, which restricts its flexible implementation and wide applications; on the other hand, the spin-Seebeck device consists of two thin film layers of metallic substances, or magnetic insulator and metallic substances as shown in Figure, YIG and Pt, respectively. This feature reduces the installation of the device to simple coating technology, and ubiquitous implementation can be possible. Saitoh, in collaboration with NEC Corporation, prepared a system, where the heat source Gd3Ga5O12 substrate was covered with the two coating films of the magnetic insulator BiY2Fe5O12 (Bi:YIG) layer and the magnetic platinum (Pt) layer. They confirmed an induction of TE voltage (V ) across the Pt layer on the device when a heating gradient was applied perpendicularly across the system.

The spin Seebeck effect refers to the thermal generation of spin voltage, which travels over a distance in the sample. The innovative applicability of this effect is evident: as mentioned earlier, a spin current can be converted to an electric charge current or voltage by the inverse spin-Hall effect, implying that the combination of the spin Seebeck effect and the inverse spin-Hall effect provides us with a new thermoelectric (TE) conversion mechanism that allows us to harvest voltage from heat. One such ingenious application is the spin-thermoelectric (STE) coating technology.

The figurative illustration of the conventional TE and spin-Seebeck TE devices are shown in the Figure: the conventional TE device consists of electrically-connected, meticulously-arrayed numerous thermocouples (p/n) on a flat platform. This feature makes it difficult to apply the conventional TE module on a large and/or fluctuating surface of heat source objects; to the contrary, the STE coating can be easily applied even on an extended, varying heat source surface by simple coating procedures.

The Saitoh Group, in collaboration with NEC Corporation, already verified this concept experimentally by demonstrating the conversion of heat to voltage.

The research field of caloritronics was, in fact, born in Sendai. I have to mention that we can convert other fluctuations, such as vibration, light, sound and plasma, to electric field. The basic concept of the spin as a Nature's rectifier is very simple, but very powerful, and, indeed, very beautiful.

As mentioned earlier, Tohoku University, particularly, the Advanced Institute of Materials Research (AIMR), where Saitoh's exciting research activities are going on, is literally the center of spintronics research in Japan. Roughly 80% of spintronics researchers in Japan belong to Tohoku University. Besides Saitoh, leading spintronics scientists at AIMR include Professors Hideo Oono, Tomasz Dietl, and Gerrit E. W. Bauer. What distinguishes AIMR from other world-class domestic and overseas research institutions is its unique approach to materials science.

At AIMR, over 120 researcher with diverse disciplinary backgrounds from around the world conduct materials science research. These researchers use mathematics as a common language to fusion multiple research disciplines and present a new paradigm in materials science. Saitoh concluded the interview with the following comment: Mathematics has already proved to be a powerful ally to spintronics research. Just as nanotechnology has revolutionized the spintronics research, so will mathematics. More and more fascinating spintronics-related discoveries and innovations are on the way. 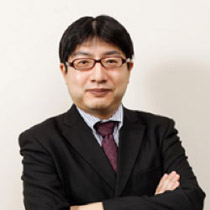 Professor of the Advanced Institute of Materials Research (AIMR) at Tohoku University.