Last month, Boeing introduced the Max9 - the latest generation of its 737, a jet that has been in service for nearly 50 years. And yet while cars gain artificial intelligence abilities and new fuel sources, it seems like airliners are evolving very slowly.

Shigeru Obayashi is trying to change that by revolutionizing human flight. The director of Tohoku University's Institute of Fluid Science has been working on a design for a supersonic aircraft that would travel at Mach 2, halving the 12-hour flight time between Tokyo and New York.

The Misora (MItegated SOnic-boom Research Airplane) project is aimed at creating a supersonic plane that won't produce thunderous sonic booms, a major drawback that prevented Concorde from going supersonic over land; the last commercial supersonic plane was retired in 2003.

As a supersonic jet accelerates, it compresses the air in front and behind it, creating the shock waves that cause sonic booms. Misora, which also means "sky" in Japanese, uses a biplane configuration that was originally proposed by German aviation engineer Adolf Busemann in the 1930s. The biplane's bottom wings are angled upward and the top wings are angled downward, leaving a large space in between for the passage of air. The setup makes the shock waves reflect off the inside surface of the wings, reducing their effects on the ground by 85 percent.

"Faster is better for travel and business trips, but supersonic travel has to be economical for passengers and profitable for airlines," says Obayashi, who worked on Space Shuttle aerodynamics at NASA until the early 1990s. "The key thing is how much we can reduce the sonic boom." 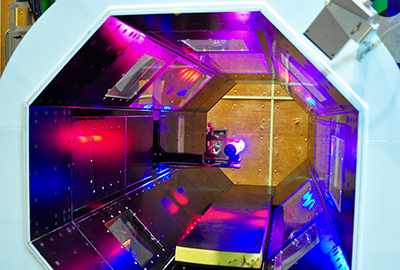 A cylinder is readied for a wind tunnel test by calibrating the position sensor on the test section of the Magnetic Suspension and Balance System, which can levitate objects for aerodynamic analysis.

Obayashi and the roughly 25 students in his lab have built a small prototype of the biplane to demonstrate its airworthiness. They are also conducting tests on miniature models that travel at Mach 2 over short distances in a ballistic testing chamber on Tohoku University's Katahira Campus. In addition, they are performing experiments with a testing apparatus known as a magnetic suspension and balance system - the largest of its kind in the world - that helps measure airflow around an object while holding it in place with electricity and magnetic force.

Meanwhile, another Obayashi plane is already flying. In 2015, the Mitsubishi Regional Jet (MRJ) had its maiden flight, becoming Japan's first domestically produced passenger jet since the 1960s NAMC YS-11. Computer modeling techniques that Obayashi developed for the optimization of the flow of air around the wings and other parts were used to improve the aerodynamic profile of the MRJ, which is expected to enter service in 2018.

"Roughly speaking, this airplane has 25 percent better fuel efficiency than existing planes," Obayashi says. "Half comes from its new engine, and half from Mitsubishi's design. Of that, 2 percent is from the optimization techniques."

The airflow optimization techniques have also been used to improve the aerodynamics of everything from washer-dryer fans to automobile tires to bullet train pantographs. Obayashi, though, is focused on Misora. The project faces many hurdles, including the lack of commercial supersonic activity, but he remains determined to see it get off the ground. 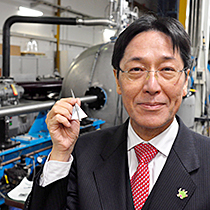