Until the Great Eastern Japan Earthquake of 2011, Onagawa, a coastal town northeast of Sendai, was one of the most prosperous fishing ports in Japan. Tohoku University set up a field research base there in 1933, and over the years, the Graduate School of Agricultural Science has contributed much to the region's marine and ecological research. 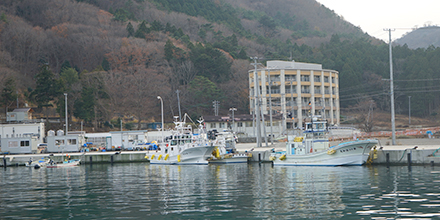 But the devastating tsunamis that followed the earthquake in 2011 destroyed the facility, forcing research work to stop. The staff spent the next few years rebuilding the laboratory and refocusing their research to address the considerable damage along the region's Pacific coast. The accumulation of rubble, loss of seaweed beds, damage to reefs, as well as pollution by toxic chemicals, all led to drastic changes to the region's marine ecosystems.

"Most of the fishing gear, aquaculture systems and sea walls were destroyed and ecological chains were broken. Even now, five years on, we are still trying to confirm the extent of the damage and assess what can be fixed," says Akihiro Kijima, a professor at Tohoku University's Graduate School of Agricultural Science. 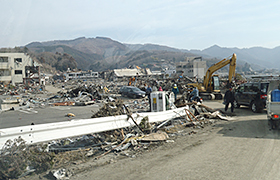 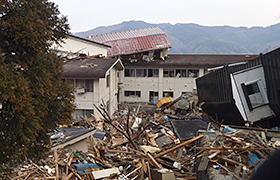 Since the researchers' return to Onagawa in September 2014, their work at the newly rebuilt Field Centre has been twofold - the continuation of laboratory research into population genetics, as well as the Tohoku Ecosystem-Associated Marine Science (TEAMS) project, a decade-long effort to monitor and restore marine life in the area through scientific research.

Led by Tohoku University, the University of Tokyo's Atmosphere and Ocean Research Institute (AORI) and the Japan Agency for Marine-Earth Science and Technology (JAMSTEC), TEAMS is funded by the Japanese government (MEXT) and involves more than 200 marine researchers from around the country.

"The goal of the national project is to reconstruct the fisheries industries and restore the rich ocean through science. We study the environmental and ecological situation and note changes in water temperature, salinity, chlorophyll and other chemical balances. Then we offer the information and advice to the government and the fishermen," says Kijima, who is also one of the board members and leaders of TEAMS.

The researchers use vessels, buoys, divers and sensors to get data from as wide and as deep as possible. They also take seawater and mud samples at several depths at different stations located around the bays. The results of their studies are open to fishery-related organizations, local governments, and ordinary citizens through public lectures and symposia. "Knowing the environmental situation is useful for fishermen to rebuild their fishery production including aquaculture. It is also helpful in creating a sustainable yield of marine production in the future," says Kijima. 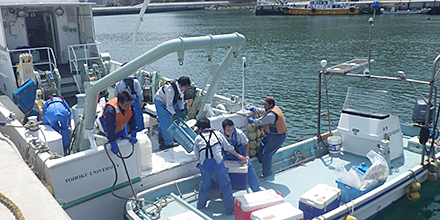 Before the disaster, it was rare for university researchers and local fishermen to collaborate. But the close working relationship since then has yielded good results, such as the successful experiment with sea urchins. Sea urchins eat seaweed, but many areas along the coast lacked sufficient seaweed after the tsunami. With their diet disrupted, sea urchins in those areas appeared unhealthy and tasted bad.

"So from that observation, we know that we need to control the number of sea urchins in certain areas so that we can restore the ecological balance," says Kijima. "But beyond that, we also tried an experiment. One of the project groups collected sea urchins in a cage and manually fed them industrially unused seaweed. Surprisingly, the gonads of the sea urchins changed colour - even in the old ones - became healthier and tasted good! So we passed that information on to the fishermen." 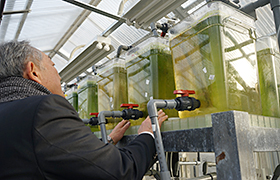 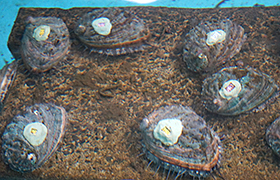 Other examples of successful collaborations between the researchers and local fishermen include regulating the number of scallop ropes in Ogatsu Bay, and collecting hoya seeds from damaged areas in Samenoura Bay through the study of sea currents and nutrients.

Bio diversity occurs through the evolutionary processes, so to keep the population of each species safe in their natural sea habitat, Kijima's team is also working towards conserving genetic diversity within species. 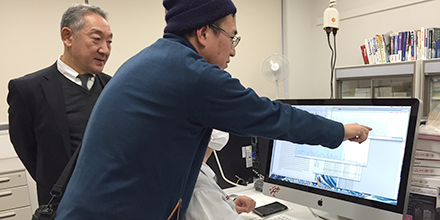 In the next 5 years, TEAMS hopes to advance certain species of fisheries with science. "The major area of my research is fish genetics and breeding science," Kijima says, adding "I love seafood so one objective is the production of new aqua-cultural strains in a separate area of the sea, for example creating fast growing abalone and abalone with beautiful shell colour."

His team is also trying to create a new species that can better survive tough conditions. "It takes about five years to see the results, that's five winters and five summers of risk, but hopefully we'll be successful!" 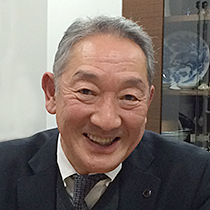