Forcing liquids into a squeeze

Watching water rippling across the surface of a pond, it's hard to imagine a substance more fluid. But at the nanoscale, strange things happen and substances can behave unexpectedly.

A decade ago, some researchers wondered whether water becomes viscous when trapped in tiny crevices, especially between two water-loving materials. For instance, what happens when water moves around confined spaces in the body?

"It was a controversial question at the time," says Kazue Kurihara from Tohoku University. "One group said that there was no change in the viscosity of confined water, but another group said there was."

In 2006, Kurihara developed a measurement technique that settled the debate. The technique could be used to significantly improve scientists' understanding of the science of friction, lubrication and wear. Better lubricants and wear-resistant material could save automobile, hard disk drive and micromachine manufacturers billions of dollars a year. 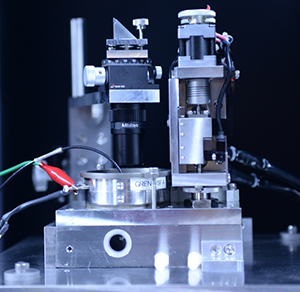 Kurihara designed the first apparatus for measuring the forces interacting between non-transparent liquids and solids.

Based at the Institute of Multidisciplinary Research for Advanced Materials, Kurihara heads one of only a few labs in the world studying the forces that emerge where two materials meet. Her research uses a tricky instrument developed in the late 1960s called the surface-force apparatus (SFA). The SFA uses springs and light waves to measure the forces interacting between two materials as they are gradually brought into contact and then pulled apart.

When the SFA was modified to study interactions across liquids, the entire apparatus had to be immersed in the liquid subject. To avoid contaminating samples, it had to be disassembled and reassembled for every experiment. "It required a lot of patience," says Kurihara, who has also worked as a researcher in the United States and Sweden and is regularly invited to speak at international events. Today, researchers just sandwich liquid droplets between two smooth materials to cut assembly times.

By the early 1990s, the SFA had been used to measure a range of nanoscale phenomena in confined liquids, including the weak forces that attract molecules to each other, known as van der Waals forces, and adhesive capillary forces.

But one important force remained unexamined: the resistance of a liquid to a perpendicularly applied -- or shear -- force, which determines its viscosity. Kurihara was eager to take on the challenge. She developed a highly sensitive technique called the resonance shear method that could measure how liquids confined between two surfaces, from one micrometer down to zero nanometers apart, reacted to shear force introduced by moving the top surface from side to side in a controlled manner1.

Kurihara used this technique to analyze a droplet of water, and discovered that its viscosity increases two-to-fourfold when confined to a space less than one nanometer wide2. Viscosity is a crucial property of a good lubricant. The confined water droplet's viscosity was just high enough, and increased sharply over a narrow distance, to make it a good lubricant. Kurihara's findings demonstrated the potential of using a very thin layer of water as a lubricant.

She has since applied the technique to a range of materials in different applications. One study assessed the viscosity of a calcium-carbonate-based building sealant and another tested cosmetics that elicit a "middle feeling" between the moisturizing shittori and refreshing sappari classes of products typically found in Japan. "Lubrication is everywhere," says Kurihara. "If there is movement, then you need a lubricant."

Despite these advances, one major limitation of the SFA remained, which many groups had struggled to address: it could only be used to study transparent liquid and solid surfaces. In 2008, Kurihara completed the development of a new apparatus called the twin-path SFA that could measure the interactions between non-transparent liquids and solids such as metals, ceramics and polymers3. "I wanted to really open up the field for materials science research," she says.

The problem with the traditional SFA was in the way it calculated distance by transmitting light through the two surfaces and interfacing liquid. Kurihara's apparatus instead measures distance by reflecting light against a mirror on the lower surface. It can achieve a distance range of 1 nanometer to 5 micrometers. The model has since been sold to two universities and two commercial laboratories through a license agreement with a scientific instruments manufacturing company.

Kurihara's team plans to further develop the apparatus, to study surface forces at different temperatures. "I hope to develop a science of 'forcemetry' that uses force to detect unknown phenomena."

A better understanding of surface force interactions could save automobile and micromachine manufacturers billions of dollars in friction-related losses. 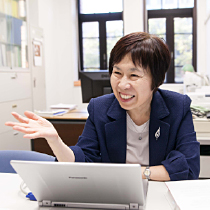