Hydrogen-related technologies are poised to transform the world's energy infrastructure, and Shin-ichi Orimo's group is leading the charge in this field

Shin-ichi Orimo's eyes light up as he holds out a small tube containing a nondescript white powder. Inside the tiny granules is densely packed matter of the most abundant, and lightest, element in the Universe -- hydrogen. "This powder could offer a lightweight and safe means of storing energy for fuel-cell vehicles," says Orimo at the Advanced Institute for Materials Research, Tohoku University.

Orimo has been studying hydrogen for the last three decades, focusing on its potential for storing energy. Most recently, he has been developing hydrogen-containing materials, known as hydrides, which offer a much more compact way of storing hydrogen than bulky gas cylinders. The hydride held between his fingertips had been synthesized in his laboratory at Tohoku University. 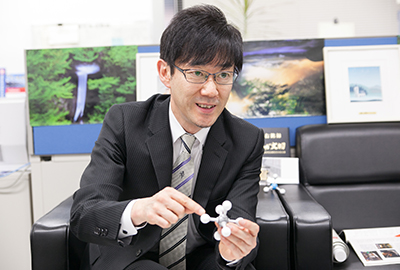 Shin-ichi Orimo at the Advanced Institute for Materials Research, Tohoku University, is excited about the potential of hydrogen-containing materials known as hydrides for energy storage.

Hydrogen is a very attractive energy source -- it is safe, highly compatible with electricity generation and storage, and pollution-free. The only waste material it produces is water. But what Orimo finds most fascinating about hydrogen is its simplicity. This simplicity gives it greater flexibility in chemical bonding than larger, more complex elements. "It's incredibly versatile," says Orimo.

This flexibility enables the hydrogen in materials to be readily converted between different forms ― a property that can be exploited to store electrical energy as chemical energy to be released later when needed. "Hydrogen in the form of hydrides could even be used to store energy generated over the summer months for the winter months," Orimo explains. Energy storage is vital for broadening the application of renewable energies such as solar power and wind energy, which generate power intermittently.

Orimo and his research group synthesize new hydrides that contain lightweight metals and have special crystal structures, and then characterize their properties. Among them, Orimo's team discovered in 2007 that the ionic conductivity of a hydride containing the metals lithium and boron suddenly leaps by a factor of about 1,000 when its temperature exceeds 117 degrees Celsius1. The great significance of this 'superionic conduction' has only recently been appreciated for use in batteries2. 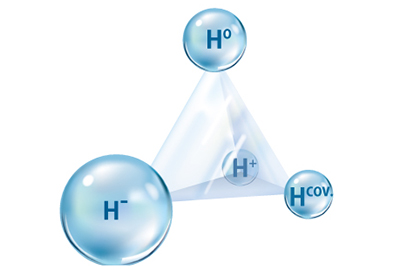 Hydrogen exhibits great flexibility in its bonding states, making it ideal for storing energy as well as for many other applications.

Orimo's research bridges the gap between fundamental science and practical applications of hydrides. More specifically, his team is seeking to improve the energy density and safety of batteries by investigating the use of superionic hydrides as solid-state electrolytes -- work being done in conjunction with Hitachi. In November 2015, they announced the development of a new technology that would improve the charging and discharging performance of all-solid-state lithium-ion batteries, a development that promises to extend the application of these already widely used batteries.

As well as collaborating with major companies such as Hitachi, Mitsubishi Gas Chemical, Toyota Central R&D and Toshiba, Orimo provides a consulting service for other companies. He also chairs a recently established national committee that brings together representatives from academia and industry to improve the functional applications of hydrogen.

A whole industry built on hydrogen is on the verge of emerging, starting with hydrogen-fueled cars, and grand plans for hydrogen-powered houses, offices and even ships. For about US$60,000, Toyota sells a hydrogen-powered car, appropriately named Mirai ― Japanese for 'future'. And in 2015, Toshiba announced a prototype stationary hydrogen-based facility, named H2One, for storing electricity generated from solar power for later use in buildings and homes. The Japanese government is getting on board and will promote hydrogen-based technologies in conjunction with the 2020 Tokyo Olympic Games. 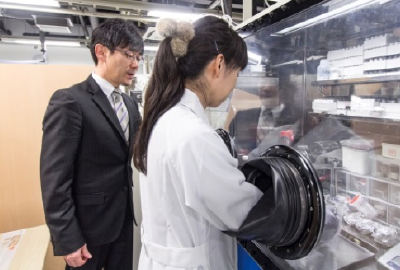 The reactive nature of hydrides means that they need to be handled in an inert atmosphere such as under nitrogen in order to study their intrinsic properties.

Orimo's group has also been searching for superconductivity in hydrides. This is currently a very hot topic. In August 2015, hydrogen took the superconductor world by storm with the discovery that sulfur hydride exhibits high-temperature (203 kelvin) superconductivity when subjected to high pressures. Orimo's group is trying to explore this area. "We collaborate with researchers who perform computations on various hydrides," says Orimo. "They predict the properties of new hydrides and then we produce them in the lab. This cycle of prediction and synthesis is going very well." 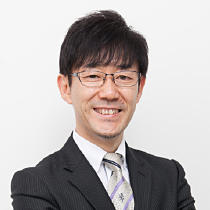