Some sense of touch

Mami Tanaka at Tohoku University's Graduate School of Biomedical Engineering has developed robotic systems that can sense tactile sensations like roughness and hardness.

At home from high school one day, Mami Tanaka was watching television when a commercial depicting a robotic hand grasping and lifting an egg caught her attention. "Robotic hands have become perfect," she thought to herself.

The experience inspired Tanaka to study mechanical engineering and spend the next two decades trying to develop artificial sensors capable of measuring not just pressure, but also more complex sensations such as pain, temperature and spatial orientation that make up the touch experience.

Now a professor at Tohoku University's Graduate School of Biomedical Engineering, Tanaka has developed sensors that can categorize the roughness and hardness of objects, which can be used for many things, including helping doctors detect prostate cancer.

"As my research progressed, I realized how far we were from developing robotic hands that could function as perfectly as the human hand," says Tanaka. 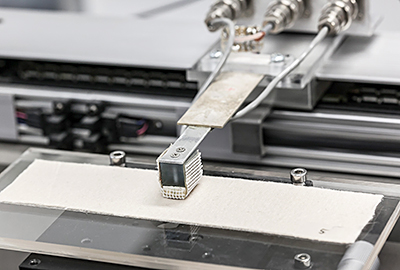 Mami Tanaka, a professor at Tohoku University's Graduate School of Biomedical Engineering, has developed a sensor to measure fabric roughness using thin films of the piezoelectric material polyvinylidene fluoride on an acrylic block attached to a sliding robotic arm

Our skin, joints and muscles are lined with millions of specialized receptors that detect sensations as subtle as the twitch of a fly's legs or as sharp as a cold shower. When stimulated, these receptors trigger activity in peripheral neurons, which then send signals to the brain via the central nervous system.

But unlike vision and hearing, which can be realistically reproduced using cameras and microphones, or corrected and enhanced using glasses and hearing aids, touch is not well understood.

Tanaka focused on a specific type of receptor known as the Pacinian corpuscle, which recognizes high-frequency vibrations generated when stroking fine textures. She discovered that a lightweight and flexible piezoelectric material called polyvinylidene fluoride responded to mechanical stress with a similar electrical output to the Pacinian corpuscle: two sharp voltage peaks indicating the start and finish of an applied pressure.

To develop a sensor for measuring roughness, Tanaka stacked thin films of polyvinylidene fluoride onto an acrylic block attached to the tip of a robotic finger that could slide over a range of fabrics. She analyzed the sensor's electrical output in the frequencies recognized by the Pacinian corpuscle and compared the results to subjective evaluations by experts in the textile industry on the smoothness and roughness of each fabric. Remarkably, she discovered a close correlation between the robotic and human responses, thus proving the sensor's efficacy. 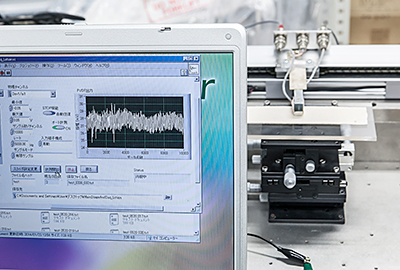 The sensor converts mechanical pressure into an electrical response that, once processed, correlates to a certain grade of roughness

Tanaka went on to develop a sensor that can objectively detect prostate diseases, from bone-hard cancerous tumors to softer hypertrophic tissue. To do this, she placed a polyvinylidene fluoride film at the tip of a wearable rubber finger that can be worn by a practitioner during an examination. In tests with seven patients, she found that the strength of the sensor's electrical output varied with the stiffness of the prostate gland. This result encouraged Tanaka to develop a more advanced palpation sensor that can recognize not just hardness, but also the size and surface characteristics of tumors. The sensor would also need to be able rule out normal free-floating lumps.

"The Graduate School of Biomedical Engineering is one of a kind in Japan, bringing together Tohoku University's long history of research in medicine and engineering," says Tanaka. "We want to invent the future."

At Tohoku University, she has benefited from assistance offered to female researchers, such as grants for hiring temporary research support staff while on maternity leave. In a male-dominated field such as engineering, this has been particularly beneficial. "Without this support system, I would have quit my research," says Tanaka, who founded the Association of Leading Women Researchers in Engineering (ALicE) in 2013 to engage more closely with female engineers on campus.

Women had accounted for just two percent of her graduating class, so Tanaka was pleased to see that females represented 10 percent of incoming mechanical engineering students in 2014 -- the highest proportion the university has seen.

Further progress in the field of tactile sensors will involve improving the mobility of robots to better mimic the human hand's manipulation of objects, she says. Tanaka is now waiting for robots to not only grab and lift eggs, she jokes, but also crack, fry and serve them for breakfast. 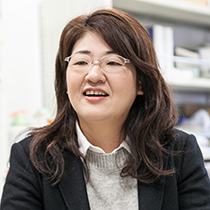