There is a saying that when the student is ready, the master will appear. This sentiment is dependent on the availability of the master, and when it comes to learning cultural practices transmitted by communities over generations, it cannot be guaranteed.

The Horyo Kagura dance has been handed down for 300 years at the Ogami Shrine in Aomori Prefecture. The dance is used in ceremonies to pray for plentiful harvests, fishing and good health.

Folk rituals and performances, which were once an integral part of the social fabric of Japan's regional communities, have a declining number of skilled practitioners. Historically, traditional arts are a form of cultural expression that have provided communities with a sense of identity and the occasion to connect socially. But with rural-urban migrations and changes in lifestyle, this flow in the transfer of knowledge has been interrupted -- to the extent that there is concern that these traditions will be lost.

Professor Shinichi Watabe, Dean of the Graduate School of Educational Informatics, says that the world of traditional performing arts is a very analog one. This is because the method of passing on information has remained the same for centuries. With this in mind, he wanted to juxtapose the traditional method of learning against using Information Communication Technology to support the learning of dance.

He decided to introduce digital technologies to record and preserve dances. The learner can watch the recordings, reflect on the movements of their teacher, and eventually their own. "It's an important part of the process as the knowledge of traditional arts in Japan isn't simply a unilateral transfer from teacher to student," explains Watabe. "The apprentice must learn techniques from observing the master."

Watabe has been digitally recording 'kagura' and other traditional arts since 2002. When the 2011 Tohoku earthquake wiped out entire communities in a day, the need to record traditional arts increased. In response to that, he created the 'Tohoku Traditional Performing Arts Archives', and together with Associate Professor Katsumi Sato, uses motion capture, a system widely used in the film and gaming industry, to digitally record human movement. Sensors are attached to the body, data is sent wirelessly to a computer and mapped into a 3D model. The method allows complex movement to be recreated in a physically accurate, yet simplified manner.

Among the difficulties in learning dance is the volume of information the learner must process. By digitizing the dances, the information is pared down to the movements and reproduced using simple computer graphics. When replaying the dances, the angles can be viewed from multiple perspectives. Students can also have their own performance recorded and overlaid on top their teacher's, which can enable them to quickly see what mistakes they were making and where improvements need to be made.


Nakano Kagura dance from Miyagi Prefecture. As digital data is easy to process, the output can be tailored to suit specific needs.

The response from dance experts who worked on the project has been positive, although they've pointed out that the computer graphics lacked the ambience portrayed in a live dance performance. Sato has made improvements on this by adding costumes and recreating scenes based on the traditional dance environment. This brings the animations to life and helps set the scene for willing learners.


The dances of the student and master are juxtaposed, so the student can see where improvements need to be made. Here, the master is pictured on the left.

Watabe insists that the archives are not meant to replace the traditional method of learning that comes with the benefits of human contact. The main purpose is to support learning so that students can easily absorb information, constructively review and ultimately raise the artistic quality of their performance. In an age where online learning resources are readily available, the archives are of great relevance as a learning tool and as a way to help to ensure the survival of cultural heritage.

Afterword:
In 2003, The United Nations Educational, Scientific and Cultural Organization (UNESCO) created the Convention for the Safeguarding of the Intangible Cultural Heritage. The convention aims to safeguard and preserve intangible cultural heritages around the world. Japan has already registered a number of cultural practices, including the regional Shinto theatrical dance otherwise known as 'kagura' or 'god entertainment' in 2009. 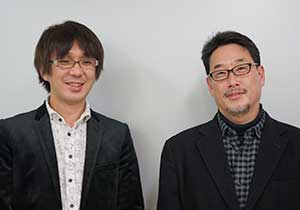